The Island of Sark – a microcosm of Capitalist Representative Democracy 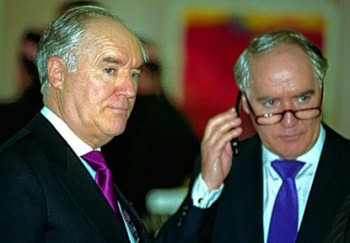 An excellent profile of Sark by Sarah Montague can be heard here.

The Island of Sark with a population of 600, became probably the most representative democracy in the world in 2008, with a ratio of one elected representative for every 18 constituents. It also has an “free” press as in free from state control, local GP who has been ousted by the press, aÂ hereditaryÂ “Lord” who can delay new laws and a third of the land owned by wealthy capitalists, the Barclay Twins. The transition to democracy was championed by the Barclays and they sponsored their preferred candidates during the election.

However when the people of Sark voted contrary to the wishes of the Barclays, the twins’ withdrew their investment and saying “the voters of Sark have no-one else to blame but themselves”.Â When the local GP was targeted by the newsletter believed to be funded by the Twins, 100 people came out to show their support for the GP but it was of no consequence.

The democratic representatives have no power to challenge the economic might of the twins yet despair at their influence over the Island. The Islanders themselves are portrayed as cowering to the Barclays as their livelihoods are held to ransom by the threat of the removal of the Barclays’ financial investment. Ineffective government seemingly dragged into submission by the creeping influence of those who hold unaccountable economic power.

Welcome to capitalist democracy, choose either: to do as the capitalists say or accept destitution. Elected representatives can either follow the economic interests of the powerful or be ousted through inertia and economic stagnation.

The Coalition Government now and Labour Government before that realised this, without the support of leading Capital, local or foreign then economic depression awaits. This is why Labour must support the cuts, they can posture to be against it but cannot promise to actually *do* anything about it. Soliciting donors and holding secret dinners are only for minor details which political parties use to differentiate themselves to competing capitalists, however the major parameters of economic policy have already been set and are communicated through the corporate owned by state-free press. Â The Island of Sark today is a microcosm of all capitalist representative democracies, liberal or otherwise.