Decades after Rupert Murdoch banned unions at News International, the NUJ is back in Wapping 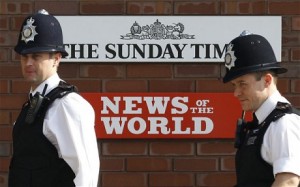 The NUJ is back at News International headquarters in Wapping, more than twenty-five years after beingÂ derecognised and locked out during the Wapping strike of 1896.

A newly created NUJ (National Union of Journalists) chapel is seeking legal action against parent company News Corporation after a large stack of documentation from Sun reporters was handed over to the police as part of an investigation into corrupt payments, The Journalist, the NUJ magazine reported last week.

The journalists fear that the documents, which include confidential emails, articles and transcripts of internal meetings, will identify legitimate sources to the police and may lead to whistleblowers being identified.

As a response to what the journalists see as an attack on professional standards and press freedom, the chapel are seeking an injunction against parent company News Corporation to stop its Management and Standards Committee (MSC) from passing on any further information.

Three Times reporters, who have been in contact with colleagues at the Sun, have agreed to be named on the injunction, and a meeting of all NUJ members at News International is being planned, the NUJ publication reports.

NUJ general secretary Michelle Stanistreet wrote in the same issue that the union had been flooded with calls from sources who had passed on information to News International journalists, fearing arrest and losing their jobs.

Stanistreet said: â€œIf you had to think of the one overriding responsibility of any journalist â€“ a core principle enshrined in the NUJâ€™s Code of Conduct â€“ it would be the protection of sources. Itâ€™s a vital aspect of a free press â€“ that whistleblowers and sources need to be able to come forward and share information they believe the public should know about, in the certain knowledge that their identifies will be protected.

“The union has a long record of defending members from having to identify their sources.Â  It was an NUJ-backed case that fixed the journalists’ “right to silence” in European law. In 1996 Bill Goodwin, a young reporter on a business magazine, The Engineer, won a landmark case against the UK government at the European Court of Human Rights.”

The MSC had been set up by News Corp to ensure cooperation with investigations into phone hacking and corrupt payments in the wake of the scandal that led to the closure of the News of the World in July last year.

Journalists at News International are represented by the management-backed News International Staff Association (NISA). In February, Stanistreet wrote on the blog of Neville Thurlbeck, former news editor at the News of the World, that NISA was â€œset up by Murdoch as a union-busting move to legally block the NUJ from seeking recognitionâ€ and that â€œthe organisation is not capable of providing journalists with independent representation and genuine protection.â€

NISA was created during the Wapping dispute of 1986, when Murdoch sacked 6,000 workers and withdrew workersâ€™ recognition from their unions in a move from Fleet Street to Wapping. The dispute is widely regarded as turning point in the history of British trade unionism and industrial relations.

The crushing of the unions also allowed Murdoch to fundamentally reform editorial management and further what he called a ‘cultural revolution’ against the British establishment. Murdoch evidently did not succeed in altering Britain’s power structure, but, as east London-based community centre worker and campaigner Kevin Blowe writes on his blog, Random Blowe:

“The other legacies of the [Wapping] strike have become clear: removing trade unions from Wapping gave Rupert Murdoch the absolute power to ensure that his journalists did whatever was necessary in the pursuit of greater profit – even when, as we’ve seen with the phone hacking scandal, the methods used were illegal. It also cemented a cosy and corrupting relationship between News International, the government and the Metropolitan Police that has continued for 25 years, one that only now is the Leveson Inquiry beginning to pick apart.”

Since the start of Operation Elveden, the Metâ€™s investigation into corrupt payments to police officers and public officials, 12 current and former Sun journalists have been arrested.

Next week, the NUJ will be representing Jason Parkinson, a member and video journalist together with BBC, ITN, BskyB and Hardcash Productions seeking a judicial review of a court decision, forcing journalists, media organisations and broadcasters to hand over footage taken during the disturbances at Dale Farm, when travellers were evicted from their site by the council.

Woodberry Down in Hackney: how ‘regeneration’ is tearing up another east London community
June 28, 2012

A tale of two Olympic cities: the need for green and decent jobs in London and Rio
June 19, 2012


"Decades after Rupert Murdoch banned unions at News International, the NUJ is back in Wapping" (with quote by me) http://t.co/UtdtGiVp


RT @TopsyRT: Decades after Rupert Murdoch banned unions at News International, the NUJ is back in Wapping http://t.co/S4szjfD9


In case you missed it: Decades after Rupert Murdoch banned unions at News International, the NUJ is back in Wapping http://t.co/eaktIEc9