Keep On Pushin: the warrior music and political soul of Curtis Mayfield, 1942-1999 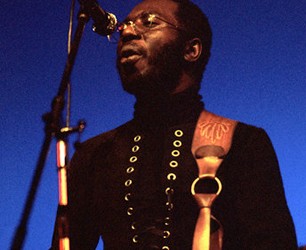 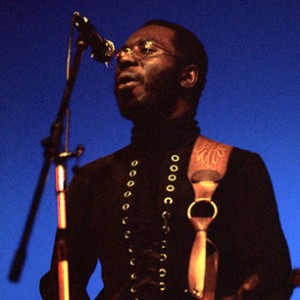 On what would be Curtis Mayfield’s 70th birthday, KeremÂ Nisancioglu explores the soul artist’s musical legacy and the political context in which his music found its resonance.

â€œWeâ€™re believing very strongly in equality and freedom for all, but especially we people who are darker than blue… weâ€™re not trying to offend anyone, but basically telling it like it is.â€

These humble but confident words spoken by Curtis Mayfield during a 1971 gig neatly encapsulates the soul of a musician that came to define the music of the civil rights movement. While Marvin Gaye and James Brown were more famous names that penned politically charged songs, Mayfield was the indisputable forefather of radical soul music. As SNCC organiser Stanley Wise said â€œyou could see his records on every movement turntableâ€. It was â€œwarrior musicâ€ in the words of activist Gordon Sellers, the â€œsoundtrack of the movementâ€ according to Craig Werner.

Growing up in Chicagoâ€™s Cabrini-Green ghetto, the marriage of music and politics that would distinguish his career came naturally to Mayfield. â€œWith everything I saw on the streets as a young black kid, it wasnâ€™t hard during the later fifties and sixties for me to write [in] my heartfelt way of how I visualised things, how I thought things ought to be.â€

This intimately felt attachment to the social conditions around him helped Mayfield, with his band The Impressions, give expression to the spirit of the civil rights movement with the classic â€˜Keep On Pushinâ€™. Having been intensely affected by the Martin Luther King-led demonstrations inAlabama, Mayfield wanted to, in his words, â€œwrite something that maybe could help motivate the people.â€ In time, â€˜Keep On Pushinâ€™, along with â€˜People Get Readyâ€™ â€˜Weâ€™re A Winnerâ€™ and â€˜Meeting Over Yonderâ€™, would become ubiquitous on the demonstrations, mass meetings and marches of the equality movement.

In these early pieces, one cannot get away from Mayfieldâ€™s profound Gospel influence. Gospel songs tell a personal story of emancipation, but one that is only affirmed – and given its content â€“ by interacting with the audience. In â€˜People Get Readyâ€™ this interaction between community and individual takes its form through the call-and-response vocal arrangement; The Impressions trade lines between the singers individually before combining in harmony. For Rob Bowman â€œthe net effect communicated a sense of community where individuality was valued but, at the same time, it was understood by all that the community was greater than the sum of its parts.â€ Put differently, â€˜People Get Readyâ€™ insisted that personal freedom and equality could not be separated from freedom and equality for all.

Unlike â€˜Keep On Pushingâ€™ and â€˜People Get Readyâ€™, â€˜Weâ€™re A Winnerâ€™ was considerably more explicit in its political message and was consequently banned from numerous radio stations for being too â€œmilitantâ€. As Mayfield later reflected, â€œit was about a mass of people during the time of struggleâ€¦ it sort of locked in with the movement of equality.â€ As such, â€˜Weâ€™re A Winnerâ€™ is exemplary of the key threads that ran through The Impressionâ€™s music in this period. The sentiments of love, determination, unity and optimism struck a deep chord with a civil rights movement based on peaceful disobedience and interracial equality. Displaying, at the same time, a strong sense of pride and confidence, â€˜Weâ€™re A Winnerâ€™ also spoke directly to the Black Power movement.

This duality reflected an absence of partisanship in Mayfield â€“ he never thought it necessary to take sides in the civil rights/black power schism. â€˜Weâ€™re A Winnerâ€™ was an ode to an array of leaders â€“ King, Stokely Carmichael, Malcom X, Rap Brown â€“ as well as those Mayfield fondly called the â€œinvisible heroes of the movementâ€.

Yet Mayfieldâ€™s appeal across political boundaries did not mean he was uncritical in his support. â€˜Choice of Coloursâ€™, â€˜Check Out Your Mindâ€™ and â€˜We People Who Are Darker Than Blueâ€™ were all challenges to the assaults, betrayals and sell outs coming from within and outside of the movement. â€˜Choice of Coloursâ€™ in particular anticipated the numerous problems that would beset the struggle for equality; at the turn of the decade, the optimism of the civil rights movement at its zenith began to subside. Black Americans subsequently struggled with the combined setbacks of Martin Luther Kingâ€™s assassination, Nixonâ€™s election on a racially charged ballot, the ravages of the Vietnam War, and deteriorating living and working conditions brought about by recession.

These changing circumstances resonated through Mayfieldâ€™s output in this period. As Werner suggests, â€œthe series of songs he released between 1968 and 1971 charted the confused and sometimes contradictory constellation of thoughts and feelings he shared with countless citizens, black and white.â€ Displayed starkly in the progression of his sound, the sweet and uplifting melodies of the Impressions age gave way to the anxious vocals and Afrocentric rhythms that defined his solo career. Charting the world of the â€œpimp and the pushermanâ€, Mayfieldâ€™s soundtrack to the blaxploitation flick â€˜Superflyâ€™ is the most well known expression of this sonic transformation

The style that would define Mayfieldâ€™s sound in the seventies was honed in the classic (and possibly his best album) â€˜Curtisâ€™. Opening the album, â€˜(Donâ€™t Worry) If Thereâ€™s A Hell Below Weâ€™re All Going To Goâ€™ was a melancholic, haunting and uncompromising take on the socio-political challenges facingAmerica. The hard-hitting distorted bassline, frantic conga, and urgent strings/ horns buttressed fraught vocals scoffing at â€œNixon talkin bout: â€˜donâ€™t worryâ€™â€, while chastising â€œeducated fools from uneducated schoolsâ€

If â€˜Donâ€™t Worryâ€™ was Mayfieldâ€™s warning ofAmericaâ€™s steady slide into an apocalyptic future, the subsequent track – â€˜Other Side Of Townâ€™ – denoted the arrival in Hell itself. Here Mayfield tearfully documented growing inner city inequality and the tragedy of working class alienation:

Following a detour through (in this authorâ€™s opinion) the greatest love song ever written (â€˜Makings Of Youâ€™) â€˜We People Who Are Darker Than Blueâ€™ modestly polemicized against a community that had abandoned the struggle for interracial equality in the name of either Black Supremacy or individual aggrandisement:

Pardon me brother,
As you stand in your glory,
I hope you wonâ€™t mind,
If I tell the whole story

This is the live recording from the aforementioned gig:

Always true to his gospel roots, Mayfield sought to make music that would encourage and inspire, rather than demoralise. Accordingly, Mayfield concluded â€˜We Peopleâ€™ with the optimistic hope for â€œa brighter dayâ€, before slapping the listener with two hits of the snare and launching them into the euphoric redemption of â€˜Move on Upâ€™.

If Mayfieldâ€™s music was inseparable from the world around him, the decline of his appeal and fame in the late seventies and eighties can also be traced to the social context in which it occurred. The dispersal of organisations at the forefront ofAmericaâ€™s civil rights movement, the instantiation of Reganâ€™s neo-liberal project, and a turn towards the rampant individualism of the eighties was reflected musically in the rise of Discoâ€™s celebration of glamour, sex, and personal hedonism. Against the decadent dazzle of Disco, the anguish, communality and redemption of Blues, Soul and Gospel receded into the background.

Mayfield had trouble adapting to these trends, and, excluding the odd track here and there, was unable to reach the towering heights of his earlier output. Yet Mayfield never lost his passion for music. After suffering a tragic accident in 1990 that left him paralysed from the neck down, he still managed to record what would be his final album â€˜New World Orderâ€™, before passing away in December 1999.

Mayfieldâ€™s legacy is complex, but not difficult to grasp. There are traces of his inspiration in musicians as diverse as George Clinton, Bob Marley, Aretha Franklin, Jimi Hendrix, Bob Dylan, Bruce Springsteen, Jeff Beck, J Dilla and Lauren Hill; if a musicianâ€™s importance can be judged by their influence on other artists, then Mayfield will be long remembered as one of the all-time greats. But moreover, beyond the now insular and increasingly apolitical world of music, the enduring memory of Mayfield is wedded to the optimism of the civil rights movement, and the continuing determination to see the people make a better world.

This article has been co-published with the New Anticapitalist Initiative