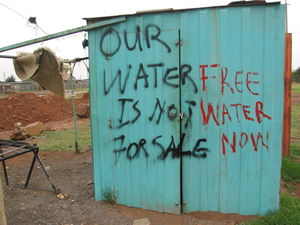 A couple of miles west of Accraâ€™s beach hotels is sweet smelling Lavender Hill. Itâ€™s where the cityâ€™s raw sewage is dumped into the Gulf of Guinea and itâ€™s next to some of the poorest areas in town.

Last week, a chunk of neo-colonial sewage issued from the mouth of the IMFâ€™s Christine Lagarde. She has more sympathy for poor rural African children than for tax dodging Greeks. Whoâ€™s she kidding? Aside from the ugly truth about Greeceâ€™s tax dodging 1% (well, the worldâ€™s 1%), the other ugly truth is that the IMF and the World Bank are directly responsible for the one chair between three schoolchildren in Niger, an ex French colony, that Lagarde laments. The IMF and the World Bank and other financiers like the EU and the British government are directly responsible for the last thirty years of privatization and austerity measures that Legarde knows have destroyed public services Africa wide and impoverished millions of Africans. Still the worldâ€™s richest continent, and still the international eliteâ€™s goody bag of choice.

But Ghana. Its economyâ€™s growing – at a rate of 10%. Its elections work. Oil revenueâ€™s starting to come in. Itâ€™s not all that corrupt, not compared to near neighbour Nigeria anyway. Isnâ€™t Ghana an African success story?

Depends what you mean by success. The 70% of Ghanaians who have access to neither a WC nor a pit latrine and who defecate in a bucket or in a pan, or in a brutally filthy public toilet â€“ or anywhere they can find, like the beach – wouldnâ€™t say so. Nor would the majority who canâ€™t afford to store water in large quantities from their intermittently working taps. Nor would the many people in poor urban areas and in rural areas who have no piped water at all, who have to buy water off water tankers, and who pay more for water in absolute terms than the rich.

Another way of looking at success is resistance. Greek resistance to the 1%â€™s legally sanctioned crimes is well recorded. But African resistance? Not so much in the news.

Ghanaâ€™s had a good thirty years of neo-liberal â€˜reformsâ€™ to public services, that is, conditions on what some would now call fraudulent loans. In 2005, the World Bank pushed through a privateâ€“public management contract in Ghanaâ€™s water sector which left the then enthusiastic government financially responsible for costs and investment, and left Aqua Vitens Rand (AVR), a Dutch South African consortium, responsible for nothing more than managing Ghanaâ€™s urban water services, with a brief to increase efficiency and revenue collection. Not to improve water provision, note, and forget about sewage.

The response was a ratcheting up of the already highly active campaign against water privatisation. By June 2011, the management contract between AVR and the Ghana Water Company, the latter 100% owned by the government, was dead. How did this happen?

The National Coalition Against the Privatisation of Water was launched at a forum in Accra in 2001. Members of South Africaâ€™s Anti-Privatisation Forum and Municipal Workersâ€™ Union and Boliviaâ€™s Cochabamba water struggle told participants about the disastrous effects of water privatization in their countries. Coming out of the radical NGO sectorâ€“ as opposed to the sector co-opted by the pro privatisation lobby – and speaking for the outraged majority without toilets or water storage, the Coalition embarked on ten years of pickets, meetings, and media campaigns. It survived splits and government witch hunts.

By early 2011, the Public Utility Workers Union was openly campaigning against the renewal of the contract between AVR and the Ghana Water Company. NGOs who had previously backed water privatization were working with the Coalition. The Minister for Water Resources, Works and Housing began dropping hints that the contractÂ wouldn’tÂ be renewed.

On all major contractual obligations AVR had failed, a contract that theyâ€™d got on the cheap: it was a management contract, not a lease contract. They failed to decrease non-revenue water, they failed to increase the production of water, and they failed to improve bill collection. Service delivery (not surprisingly) failed to benefit from reducing the number of workers, i.e. cutting wage bills.

This month, June 2012, the governmentâ€™s one year review of national water provision is up. Privatisation didnâ€™t work. So what now? Leonard Shang-Quartey of ISODEC, the main NGO behind the anti privatisation Coalition, says money is the source of Ghanaâ€™s water problems. Not management problems, not too many workers. Not enough money. You canâ€™t be efficient without enough money. Set up a strong â€“ that is, well financed and well structured – national water authority, he says, and Ghanaians will provide themselves with the water that their country flows with.

According to Alhassan Adam, formerly of ISODEC and now with Oxfam in the UK, the World Bank, the water sectorâ€™s major funders despite Chinaâ€™sÂ  interesting African escapades, doesnâ€™t want management of Ghanaâ€™s water services to revert to the publicly owned Ghana Water Company or its equivalent.

But the public-private AVR contract was the World Bankâ€™s idea in the first place, and Ghanaians chucked it out.