The Multicultural Politic, with a brand new look and a strengthened editorial team, Â was re-launched last night in a two-hour plenary and debate on the meaning of multiculturalism, and the challenges facing Londonâ€™s multicultural communities.

The audience at Goldsmiths College listened as Estelle kicked off the evening with an interesting analysis of what multiculturalism was meant to do â€“ allowing diverse communities to live together â€“ and what it has become â€“ a way of thinking that overlooked race and ignored the root causes of discrimination, and the role of the state in fostering racism. The multicultural idea, she said, was state conceived but wrongly conceived, and doomed from the outset.

Estelle went on to talk about the work NMP are doing in Newham â€“ a host borough for the Olympic Games â€“ particularly in relation to police harassment and brutality. The governmentâ€™s strategy around the Olympics will form the groundwork for future policies, and it is already becoming evident that there is an emphasis on security by the state â€“ the needs of communities are not being prioritised, she said. NMP have recruited a small army of volunteer community legal observers to be deployed in Newham when the Games descend on London in a few weeks. This group will monitor the increased police presence and the impact of this on equality and human rights entitlements, particularly for youth in the area.

Estelle closed her speech by emphasising the need to document our struggles, learn from the past and continue to challenge dominant media narrative.

Adam Elliot-Cooper, associate editor at Ceasefire Magazine, opened by saying that for media to be genuinely multicultural, it has to be independent, free of corporate constraints. He also recognised the role independent blogs, like Ceasefire and The Multicultural Politic have to play in pushing an alternative news agenda and media narrative.

Adam made a number of comparisons between the US and the UK, notably how the US has quite a large number of black intellectuals who are prominent media figures, and this not being the case in Britain. In fact, he said, British Black intellectuals, like Gary Younge, moving to the US creates a kind of brain drain here.

After a discussion and some great contributions from the floor, Ken Fero, co-founder of Migrant Media and independent film maker most notably of the 2001 documentary film INJUSTICE, was our final guest speaker. 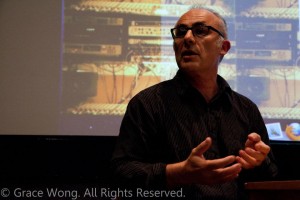 Ken took us on a quick journey through his experience of producing TV documentaries for the mainstream media. Â He spoke about his struggles with the BBC and Channel 4, who tried to tone down the message of his productions. Ken emphasised the need for journalism and media production to be rooted in communities, and talked at some length about how and why Injustice came about â€“ a seven year project that was never intended to become a documentary film.

Ken said what unites our communities is not living together but a history of resistance. â€œThere has to be an arrogance toward the state and humility toward the community”, he said.

Ken closed with an appeal for people to sign the United Families and Friends petition calling for an independent enquiry into all suspicious deaths in custody of the state.

We would like to thank our guest speakers and all those who attended last night’s event. We will be organising another event soon â€“ watch this space.

In the meantime, if you would like to contribute to our blog or you want to promote your campaign/group please do not hesitate to contact us: info@tmponline.org

VIDEO: Interview with Fear of a Brown Planet
September 27, 2012