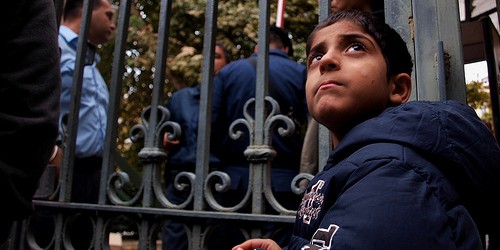 With August coming to an end and the temperatures dropping from the low 40s C to low 30s C. The northern port city of Thessaloniki shakes off of its summer lethargy as people come back from their annual holidays and the town readies itself for the return of its large student population. However, amidst the renewed hustle and bustle some things haven’t changed. Many of the businesses in the centre remain shuttered, their store fronts decorated with graffiti and For Rent signs, the cafes while now busier are far fewer in number and the restaurants mostly remain empty except on the weekend.Â The only new business is a chain of fast food outlets that does a roaring trade in in 70 cent hot dogs and cheap iced coffees.

On the other hand whether it be in the supermarket lines or in the streets the talk is about how everyone will pay the latest round of bills. The guy pumping petrol complains about the cost of road tax whilst the woman behind me in line frets about how she’ll make it through the winter if the government decides to raise the cost of heating oil by 40% as promised.

And these are the lucky ones. The ones who still have a job and some source of income. For those who were already at the bottom of the pile before the crisis took hold the situation is now dire. No Â large supermarket is complete without a gaggle of beggars waiting outside its entrance. The sight of old people and young kids rummaging through waste bins for food or stuff to recycle no longer turns heads, or even draws a comment.

For Greece’s most vulnerable the country is rapidly becoming an endless nightmare, not only because of lack of jobs or money but because they are being scapegoated by politicians in power along with their allies in the national media. For immigrants the situation is worst of all. While the foreign media have focused on the open racist rhetoric of the Neo-Nazi Golden Dawn party (which won 7% of the vote in the last national elections) the campaign against non-Greeks is not limited to the party’s shaven headed black t-shirted thugs.

With the start of the Xenios Zeus police operation Athens has been using mass round ups of anyone with a dark skin in central Athens to prove that it is tough on undocumented migrants despite condemnation by Amnesty International. With the Samaras government unable to halt economic contraction and faced with a humiliating fait accompli from Berlin, Greece’s failing political system is looking for a way out. In this they have found willing allies in the country’s ailing mainstream media, owned to large extent by oligarchs determined to make sure that the country remains in the Eurozone, whatever the social cost.

A typical example of the manner in which immigrants are portrayed in Greek news can be seen in the recent case of a 15 year old girl who was beaten and left unconscious after an attack on the Greek island of Paros. With the police under pressure to produce results they arrested a Pakistani hotel employee, who according to official reports confessed to the crime. The fact that he was not allowed access to a lawyer during his time in custody on Paros seems to be considered a minor detail. Later police said that his DNA had been linked to the crime scene. At this point both TV and newspapers decided that trials and verdicts were irrelevant in such a case and talked of “a beast in human form” and “monsters among us”.

Such language and tactics draw unfavourable comparisons with the propaganda attempts of the Nazi’s in the mid 1930sÂ and are being increasingly used by “respectable” mainstream reporters and politicians who routinely attribute rising crime rates and economic decline to the presence of immigrants.

In a climate where the nightly news bulletins are full of stories blaming the country’s growing lawlessness on ruthless foreigners, it is hardly surprising that attacks on immigrants are on the rise, increasing not just in number but also ferocity.Â

To make the situation even more intolerable, immigrants have every reason to believe that the police is not a neutral player in this increasingly violent game. During the recent elections some studies suggested the in Athens alone nearly 50% of police offers cast a vote for Golden Dawn, while Indymedia Athens and alternative news sources are full of police either turning a blind eye to racist violence orÂ even abusing foreigners themselves.

The reality is the racism in Greece has, along with poverty become part of the respectable mainstream, simply another tool to be used by an deeply unpopular political elite eager to win back support from an electorate worn down by four years of economic collapse and terrified that everything that worked so hard to achieve over the previous decades will be taken away from them.