London action in solidarity with H&M Garment Workers in Cambodia 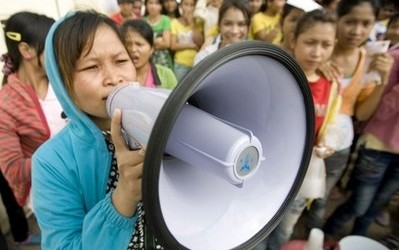 
What: Mass fainting action in H&M store
Why: To raise awareness of malnutrition, exhaustion and poverty pay faced by garment workers in Cambodia who make H&M clothes
Where:Meet on the corner of H&M store on 174-176 Oxford Street
When: 10:30 on Tuesday, on 18th September 2012

Hundreds of workers have been fainting en mass in factories in Cambodia supply clothes to the UK High Street because they haven’t had enough to eat, and they are overworked. This is the shocking consequence of the fact that they are paid poverty wages.

Over 80% of Cambodian garment workers are women, and their families and children are their main consideration when worrying about their wage. They have to make daily choices between feeding themselves and feeding/educating their kids. The wage they are paid simply isn’t enough.

What does the action entail?
We’re planning a flash mob ‘faint in’ to raise awareness of this issue and call on H&M to do something about it. (The do something has a lot of details, which we’ve worked out with Cambodian partners, but I won’t put this here).Â A group of people will faint somewhere just inside the door of H&M, and then someone will go to contact the store first aid team to see if they can do anything about it. In the mean time, others will hand out leaflets, until we get asked to leave the store. We’ll take a photo also to send to press. All in all it should take around 1 hour, so fairly quick.
More background at Jezebel and No Sweat