REVIEW: but i cd only whisper at the Arcola Theatre, Hackney 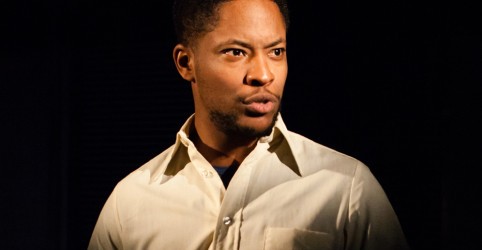 The intimate Studio 2 of the newly renovated Arcola Theatre in Dalston, Hackney is the perfect setting for a strong, dark and challenging new play called but i cd only whisper.

Written by American poet, actor and playwright Kristiana ColÃ³n and directed by Nadia Latif, it tells the story of Beau Willie Brown, a black Vietnam War veteran suffering from post traumatic stress who stands accused of a terrible crime. The play revolves around one scene, in which Beau (Adetomiwa Edun) is being interviewed by Doctor Drummond (Cornell S John), a psychologist and also a black man. Drummond is not only trying to ascertain whether or not Beau has lost his sanity, he is also trying to uncover what has happened to him in Vietnam. It is 1970â€™s America, and ‘Doc’ is placed in an impossible situation â€“ either he declares Beau sane (sending him to the electric chair) and incurs the wrath of the black community, or he maintains that Beau’s experiences in Vietnam have damaged him psychologically, leading him to commit a horrible crime, and becomes the laughing stock of his white neighbours (the establishment). Here we find the first of the playâ€™s many references to one of its core themes â€“ the relationship between racism, violence, and black mental health.

Breaking up the scene in Drummondâ€™s office, Beauâ€™s story is told through flashbacks and accounts by the people who were close to him. By his girlfriend Crystal (Emmanuella Cole), with whom he has two children and whom he deeply loved but also violently abused. By his best pal Marvin (Tunji Kasim), his white mistress Genevieve (Sian Breckin) and a US Army marshal he served in Vietnam with (Paul McEwan).

One of the main strengths of the play is the way in which, bit by bit, Beauâ€™s story is revealed, but youâ€™re constantly left guessing as to where the truth lies, and what the play is trying to tell you. This is of course also because the characters have their own perspectives, emotions and interests at heart when talking about Beau. Of the court testimonies, we only ever hear half of the dialogue, having to make do with the answers of the characters, and not the questions posed by those representing the criminal justice system. As viewer you end up developing several theories about what it is Beau has done, and why, but this does not distract from the story â€“ the tension is maintained right up to the end.

The playâ€™s title is a stylistic reference to a poem by Ntozake Shange, an excerpt of which I have pasted below.

beau willie jumped back all humble & apologetic/ i’m sorry/ i dont wanna hurt em/ i just wanna hold em & get on my way/ i dont wanna cuz you no more trouble/ i wanted to marry you & give ya things what you gonna give/ a broken jaw/ niggah get outta here/ he ignored crystal’s outburst & sat down motionin for naomi to come to him/ she smiled back at her daddy/ crystal felt naomi givin in & held her tighter/ naomi/ pushed away & ran to her daddy/ cryin/ daddy, daddy come back daddy/ come back/ but be nice to mommy/ cause mommy loves you/ and ya gotta be nice/ he sat her on his knee/ & played with her ribbonsâ€¦

Upon reading this poem ColÃ³n wanted to expand on the character of Beau and wrote the play. Stylistically the production stays true to its root, the many monologues in the play sound like the poem â€“ intensely plain spoken, rich with metaphors, littered with swear words and home truths. The production features British actors speaking in Deep South North American accents, but this in no way comes across as contrived. I forgot to say â€“ the play is seriously dark, yet hilarious at times.

Those familiar with post-colonial thought will recognise the work of Frantz Fanon, Michel Foucault, Alice Walker and James Baldwin in but i cd only whisper. In another interview Latif suggests that it could have been written about the London riots – a brilliant observation. The play’s performances are incredibly strong and the intimate atmosphere of studio 2 â€“ you are literally sitting a few yards away from the actors, and there is no stage â€“ amplifies this. It was worth every penny of the 16 quid I paid for a ticket. Go and see for yourself.

but i cd only whisper is on until 1 December. Call: 020 7503 1646 for tickets, or visit: www.arcolatheatre.com/production/arcola/but-i-cd-only-whisper


REVIEW: but i cd only whisper at the Arcola Theatre, Hackney http://t.co/hciHdQSa #buticdonlywhisper #dalston