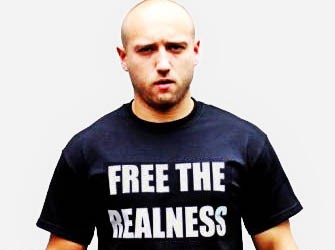 â€œHEâ€™S SO DUMB INNIT. I DONâ€™T MEAN TO SOUND RACIST YEAH, BUT HE IS AFRIKANâ€

These are the words of English Frank to a room full of Afrikans at a Hip-Hop showcase in London. I donâ€™t have to run down the sequence of events. Most of you by now have seen the video â€“ If you are yet to see it, play the video embedded below.

As I speak a big conversation is raging on twitter. It should be noted that Akala has stated publicly that English Frank was pulled up and made to apologise to the audience on the night. Akala is a Brother whose integrity I feel I can trust in this regard. Having said that in my humble opinion an apology neither wipes the slate clean, nor does it mean that thereâ€™s not a conversation to be had.

â€œBlack People, Afrikan People â€“ exist in a state of accommodation. What this simply means is that weâ€™ve gotten accustomed to getting our butts kicked for so long that we think that its normal to live in pain and in some strange way, weâ€™ve even started to like it.â€

As Afrikan people, we have become used to baring insult. So much so that we have made overlooking BLATANT disrespect some kind of enlightened state of being. It has become not only normal, but virtuous for us to let things slide and brush them under the carpet in an attempt to be the supposed â€œbigger personâ€. All so we that we can come together and dance in the name of Hip-Hop, or Reggae, or Jazz, or damn near any cultural art form created from the very blood sweat & tears of Afrikan people.

So something like this happens and in the face of this blatant disrespect we are debating things like â€œ does making a racist comment make English Frank a racistâ€. Some are out right defending him. Some are exercising high levels of diplomacy while others are remaining very silent and trying their best to promote his up coming event. A straight up challenge or strong stance on an individual in these circumstances would seemingly threaten to destroy the â€œurbanâ€ faÃ§ade that has become Black music, which is suppose to be a multi-cultural melting pot void of any racial identity. This â€œmulti-culturalismâ€ sees Europeans not only as the controllers of the business of Black music, but more & more the front men/women of the art itself.

In this environment, the â€œwhite boy who can Rapâ€ has literally become a REVERED figure and as such UK Hip-Hop has been has been rife with this dynamic for as long as I can remember. Forgive me, but I simply do not share the same reverence for European MCs and as such have never been fooled into thinking â€œwhite boys rappingâ€ is remedy for curing racism.

Racism can not be reduced to an off beat comment in a pub or on a football pitch. The deeper levels of racism lie in the conditions that govern our lives. It is about the power dynamics that exists between different races, and how we interrelate based on those dynamics. Racism is a sub-conscious mental state long before it is â€˜a commentâ€™ and it would be a mistake to deal with the comment and not address the conditions or the state of mind. Racism is not just about how â€œthe powers that beâ€ relate to â€œethnic minoritiesâ€. It operates at ALL levels of society from Parliament to on road and certainly brought itself to bare in that club on the night in question.

In truth, the REAL racism was not just in English Frankâ€™s comment alone. The real racism lies in the fact that ANY white man felt comfortable enough to say something like that in a room full of Afrikan people. This should be seen as a problem. The fact is the English Frank obviously felt he had THE POWER to say what he said in that context and come out with his body & reputation in tact. It is this same subconscious mentality that resulted in the derogatory portrayals in Professor Greenâ€™s â€œJungleâ€ video. It is the this same sub-conscious mentality that led to Bashyâ€™s â€˜Black Boysâ€™ being branded racist. THE POWER is given because too few of us even recognise it, let alone choose to challenge it.

Big Cakes (who took the mic from Frank) is a Brother who I have met on occasion and have much respect for, but I am not buying the â€œhe was drunkâ€ excuse. Quite frankly (no pun intended) I am not interested in how drunk he was. I have been around drunk Afrikan people enough to know that cussing white people is not common cultural feature associated with our being intoxicated. So what is it about white English men that makes drunkenness result in racial abuse?

To preface the comment with, â€œI donâ€™t mean to sound racist butâ€¦â€ CLEARLY indicates that he was of sound mind and knew exactly what he was saying. The wry smile with which he said it suggests that he somehow expected support from his fellow artists and the crowd at large. Please pay attention to English Frank stating that he â€œhiredâ€ the security as an excuse. He felt he had the POWER of ownership over the Afrikan andÂ thereforeÂ could ridicule and insult as he saw fit. Thankfully the crowd nicely told him where to go. But once again the attempt to mitigate with the new popular sound bite â€œwe are all Afrikanâ€, is to give such people POWER that have not right to. SuddenlyÂ everyoneâ€™sÂ Afrikan and everything bless â€“ Nah BUN DAT!

I am not here to tell anyone how they should have dealt with it on the night. But as I observe the backlash I see that there are some who are visibly angry and annoyed at those who have openly called English Frank racist â€“ Why? Why are you annoyed with those who do not feel compelled to let this just slide? Some of you are not even Afrikan!Â But for those who are â€“ Why should â€œkeeping it professionalâ€ be our primary concern? Why should professional integrity come before racial integrity? Why canâ€™t our primary concern be defending the integrity of Afrikan people?

For me this is about more than English Frank and what he said. In my humble opinion it is not the responsibility of ANY Afrikan to excuse the racism of white people. To do so is exactly what encourages this kind of disrespect. It is Black defense of white racism that breeds incidents like these.

But more importantly, we need to ask â€“ have we as Afrikan people made it our business to assert Afrikan dignity & self-determination? Or have we sacrificed it at the altar of urban multiculturalism? How is it that Afrikan cultural art forms are the ONLY cultural art forms on the planet that can be so thoroughly dominated by other people?

We are the people who invite others into our culture and allow them to take over. We tell stories of the progression of our art forms based upon how much they gained commercial success by reaching markets of white people. We write songs and encourage Europeans to scream â€œniggerâ€ at the top of their voice. We put on Comedy shows and called â€œAfrikans vs Caribbeansâ€ and make Europeans the moderator and see nothing wrong with this.

There are people in this world for whom an insult to their racial dignity could very well END YOUR CAREER. But then they own and control the industry that governs their art. Furthermore, they also control THE IDEAS that govern their industry. No Afrikan can diss a Jew and have a successful career in damn near any profession especially Hollywood. No Afrikan could stake claim to Bangra & Bollywood in the way that we have allowed others to stake claim to Hip-Hip, Reggae, Blues etcâ€¦. Nor would any Afrikan feel they had the right to. It would seem that no other people are in the position where by someone can use their own culture, to so thoroughly insult them. So is it a surprise that an incident like this happens on our door step?

I have no doubt that many of you will not agree with me. Thatâ€™s fine, we can have the discussion. Many will even attempt to suggest that I and what I have said is in it self racist. We can have that discussion to. There so much more to say on this that i have not said here. Either way, when I see Afrikan people and our culture being abused I will defend it without fear or favour and I do not apologise for this in the slightest.

I submit to you that no Afrikan owes English Frank any allegiance in the face of such insult. I humbly suggest that we use this as example of the fact that as a people we have not empowered ourselves in the way that we should. I humbly suggest that as artists business people, activist and cultural warriors â€“ we make it our business to take back the power of the culture that our ancestors bled for and stop allowing it to be squandered for an illusion of inclusion. In so doing we reduce the possibility of such disrespect occurring and/or have the means to deal with it or render it irrelevant when it does.

Thank you for reading. Peace & Blacknessâ€¦.

Tafadzwa ShakaRa MbandakaÂ is the son of renowned community activistÂ Bro. Ldr. MbandakaÂ and is an experienced multi-faceted performer, writer & workshop facilitator. He blogs at ShakaRa Speaks where this article was first published.


This article is so off point,…. “Peace and Blackness???” for real….you seem to put people in a box…even yourself…and its people like you who stop people like me from getting on with our everyday lives…. your anger has spilled over and your generalising a whole lot here…. white people are bullies, black people are victims….we both know this is not as basic as that… cultures nowadays do overlap, so to say things like “white pople are taking over black culture” is just wrong….cant black people play a piano..??? a white guy invented the piano so by your stupid logic they should just leave that to the white people …your basic arguement is anger….and im not really sure who your angry at…..? apart from enhlish frank….? or just white people in general…or do you feell sorry for black people….your offer little to no help on the issue so just shut up


Sorry, but some tosser saying something racist isn’t a political issue or worthy of comment. He’s just a git, isn’t he, who cares what he says? It’s not like he’s David Cameron.


Yeah sorry man but ur chatting shit mostly.I have racial banter with my white boys all the time, frank just picked the wrong occasion. It aint what he said, its the context he said it in. Anyway Wileys been documented a couple times saying much worse things bout whites and asians, that didnt bother u then no?