Just before the onset of Britainâ€™s switch to a post-industrial theme-park economy, Margaret Thatcher announced her flagship Right-to-Buy policy, designed to extend the joys of home ownership to council tenants by allowing them to buy their homes at a considerable discount. In August 1980, with the passing of the Housing Act, she told working class Britons that home ownership equalled class ascendancy, would provide a safety net for future generations, and would cement tight-knit communities of long-term residents. In Thatcherâ€™s own words: â€œIn about 25 yearsâ€™ time there will be a lot of people who will be inheriting something, because for the first time we will have a whole generation of people who own their homes and will be leaving them, so that they topple like a cascade down the line of the family. That is popular capitalism.â€

But almost 25 years after these words were spoken, the form of capitalism propagated by the Iron Lady often relies for its profits on the dispossession of the very beneficiaries of this policy, particularly when the local authorities controlling the Right-to-Buy properties jump on the regeneration bandwagon. A case in point is Woodberry Down in Hackney, one of Londonâ€™s biggest council estates, where all council homes are being demolished as part of a Â£1billion regeneration project. Located next to Finsbury Park and in close proximity to Manor House tube station, the area is regarded as deprived but with assets and land all too valuable to remain in public hands. 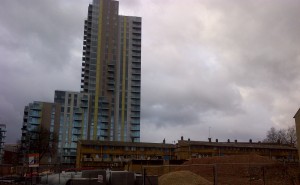 With funding for new social housing having dried up decades ago, the model for the regeneration of this estate is known as â€˜self-financingâ€™. According to Hackney Council, Woodberry Down is becoming a â€œvibrant mixed community of choiceâ€ â€“ all 2,000 council homes will be demolished to make way for a much higher density estate of 4,600 new homes funded by the sale of apartments on the private market. Council tenants will in future be renting from a housing association instead of the local authority.

The tenure mix is changing from 67 per cent social rented and 33 per cent leaseholders with Hackney Council, to 41 per cent â€˜affordable homesâ€™ (comprised of rented accommodation, shared equity and shared ownership properties â€“ more on this below) and 59 per cent privately owned. The sale of private flats by Surrey-based developer Berkeley Homes over two decades will ensure the firm â€“ which noted annual profits before tax of Â£214.8million in 2012 â€“ reaches what is believed to be their target of 21 per cent profit as agreed in the deal with Hackney Council.

Residents remaining in phase II, the next part of the estate scheduled for demolition, are all leaseholders â€“ those who purchased their council house or flat by exercising their right to buy. Hackney Council will pay them the â€˜market valueâ€™ of their property, a home loss payment of 10 per cent of that value, and a disturbance allowance of around Â£5,000 for the loss of their homes. Residents can take this money and buy a new property in the open market. But compensation â€“ based on â€˜real market valueâ€™, according to the council â€“ is not enough to buy a similar property in Hackney, a heavily gentrified inner London area that has seen house prices increase dramatically over the last ten years. The average price for a property in the borough in December 2012 was Â£397,873. 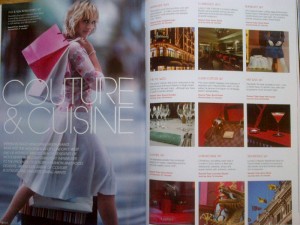 A brochure advertising the new flats at Woodberry Down

Valuations of Â£210,000 for three bedroom council flats are the norm here, but most of the new builds sold by Berkeley Homes â€“ many to investors in Hong Kong and Singapore â€“ are twice, three or even four times the value of the old council flats of equivalent size. Leaseholders simply cannot afford to buy them. They can however purchase a shared equity property with housing association Genesis in one of the new builds, but the financial requirements automatically rule out many people. The old property needs to be worth at least 70 per cent of the value of the new property, an annual income of around Â£30,000 is a minimum and deposit requirements are high. The shared ownership option is even less attractive, because former leaseholders would have to take out a mortgage and pay rent. The result? Those who believed buying their council home would allow them to retire within the community they have contributed to for decades, having paid off the homes they hoped to pass on to a next generation, are basically told they are no longer wanted.

As a result of the disastrous lack of any credible industrial strategy by successive governments, Londonâ€™s economy has become increasingly based on investors pumping money into the acquisition of assets which are assumed will rise in value indefinitely. Council tenants sitting on valuable land have to be disposed of, as the public becomes private, and council home owners on modest incomes are thrown into to competition with much wealthier counterparts in one of the most unequal cities in the Western world.

Olympic legacy-boasting Hackney Council are not particularly concerned, as they are an authority run by the type of Labour politicians who seem to think the problem of deprivation can be solved simply by displacing it. Perhaps they are blinded by the sight of shiny brochures, or simply unaware that this is indeed the Great Rip-Off â€“ a temporary solution which can quickly become a crisis of asset values with strong links to property, when the bubble bursts. The next crash, which may see them becoming surplus to the requirements of this theme-park economy themselves, may leave them wondering â€“ whatever happened to our communities?

REVIEW: but i cd only whisper at the Arcola Theatre, Hackney
November 27, 2012

Woodberry Down in Hackney: how ‘regeneration’ is tearing up another east London community
June 28, 2012
Videos from “Give Our Kids a Future March” Dalston to Tottenham March
August 28, 2011