I understand that the title is enough to make the average person immediately click the little “X” in the top right corner, fear not, I have not descended to the “dark side” nor am I practicing any kind of “evil” (at least not that I’m aware of :). I am merely trying to raise awareness and squash any misconceptions on a much needed cause, so thank you for engaging.After watching the documentary “Branded A Witch” on BBC, which looked at witchcraft in Congo (Kinshasa), and how it effects the communities there, I was compelled to explore this further and discuss many of the factors and influences this myopic documentary overlooked.I’m not negating or denying the existence of a problem with this notion of “kindoki” and how it effects the Congolese community– particularly through the manifestation of child abuse, neglect and social exclusion -Â  however, we cannot find a solution to the problem without first identifying its origins.This blog will be split into two parts: 1. The problem with this documentary 2. The issue of “witchcraft (kindoki)

1. The problem with the “Branded A Witch” documentary (and other documentaries of its kind).

This documentary is problematic, primarily due to the fact that it is reductionist and an over simplification of a very complex socio-historical issue. This documentary did not address that.

It perpetuates a narrow minded, stereotypical singular narrative not only of Congo, but of African countries in general, which normalises the issue of – in this case – “witchcraft” as if it is an ordinary part of the culture. Furthermore, it only continues the projection of Congo (and Africa in general) as “backward”, for there are always comparisons drawn between Africa and Europe from a contemporary basis without analysing the history of how things came to be. As Europe is “developed”, for there are no issues about “witchcraft”, of course, Congo (and Africa generally) are “backward” because “witchcraft is still an issue”.

Another problem is that these documentaries will make the general public react in either one of two ways. The first way is to be so revolted and disgusted by the depictions – which is understandable – that they turn away from the issue and thank their lucky stars they do not originate from such an environment, or they will focus on this issue only, and overlook the more pressing issue at hand, which continues to devastate the lives of children in Congo until this day and that is the conflict in eastern Congo of minerals and resources.

Many people are unaware of the 17 year ongoing conflict in which 6 million (and counting) people have been killed, and over 500’000 are raped as a tool for military warfare by militia men. In this conflict, approx 2.7 million of those who have been killed have been children. Today alone, 20 people died in a collapsed mine in eastern Congo (watch the documentary: Crisis In Congo: Uncovering The Truth). This issue was not brought up once, an issue which is intrinsically connected to the current socio-political situation in Congo.

Also, I feel the documentary takes advantage of, and emotionally manipulates, the presenter Kevani Kanda’s familial situation, benevolent nature and compassionate desire to raise awareness about a sensitive and serious issue, who also may not realise the overall social political historical context upon which it rests (from what was shown in this documentary alone). 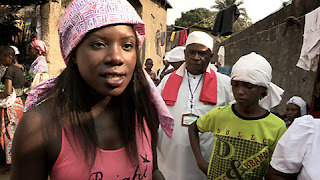 2. The issue of “witchcraft (kindoki)” in Congo (and Africa generally).

What does “witchcraft (kindoki)” have to do with it?Â  Well, firstly, when we say “witchcraft” or we even sure everyone is defining it by the same thing? Well, one dictionary give provided the definition: “The practice of magic, esp. black magic; the use of spells and the invocation of spirits”.

Another gave the definition of witch craft as “WitchcraftÂ (also calledÂ witcheryÂ orÂ spellcraft) is the use of magical faculties, most commonly for religious, divinatory or medicinal purposes.“Â

Congo has a long history of imperialist oppression over hundreds of years, notably the most oppressive reign was that of King Leopold II who sent over christian missionaries as part of the conquest (this was his message to the missionaries on their task to spread the message in Congo).

When Christianity, by way of Belgian missionaries, began to spread in Congo, it also lead to the stigmatisation, dehumanisation and demonisation of traditional indigenous Bantu-Kongo spiritual beliefs, and labelled them as “witchcraft, immediately denounces as evil and those who practiced those beliefs where punished forthwith. Henceforth, anything that was associated with traditional beliefs, such as ancestral veneration, libation, statues, sceptres, etc, was immediately labelled “witchcraft”, and any manifestation of that, was immediately eradicated of in one way or another.

This begs the question, if the phenomenon of “witchcraft” is Congolese culture, and not a consequence of colonialism, Christianity and the mission, what was “witchcraft” called, and what was it appropriated to, before European colonisers descended upon Africa?

There is the popular Congo story of “Bankanza” who, during times of colonial oppression and christian missionaries,Â  was eventually for resisting conversion to Christianity and continuing to practise his traditional beliefs. 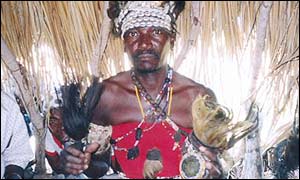 What you are in fact seeing is not the issue of “witchcraft”, but of religious fundamentalism, in the sense that, the practitioners of a religion – in this case Christianity in particular – are using extreme methods to chastise those who do not fall into their dogma, and label any digression of that “witchcraft (kindoki)”. This religious fundamentalism MUST NOT be believed to be a normalised part of Congolese culture.

Do not interpret this as an attack on Christianity, it is not. However, we must speak openly about the use of religion in the colonial oppression of Congo, and Africa.

This is Part I of the discussion. Part II will come soon.


I didn’t see the documentary, but I can just imagine. Thanks to the writer – a good summary of recent Congo history and yes brilliant point about xstian missionaries being fundamentalists. I’m guessing you’ll be getting onto the colonists’ elimination of medical care and healing skills in the name of erasing ‘superstition’ and the way this cut women’s power and status off at the knees. Like you suggest, the horrors inflicted on the people of the Congo over the years are of holocaust proportions, unmourned in this part of the world, resistance to it unsung.