It is undeniable that the British armed forces have long been responsible for prosecuting racist and colonial oppression. The British state is this week, belatedly, paying millions in compensation to those detained in concentration camps, tortured and murdered in Kenya during the Mau Mau rebellion; a few months ago, David Cameron visited the site of the Jallianwala Bagh massacre and euphemized the EmpireÂ as a succession of â€œgood and bad eventsâ€. Today, in the â€œWar on Terrorâ€, a War against a particular constructed Other, a War in which anyone potentially Muslim is potentially an enemy, an idea of a radical Islamist civilization is that â€œraceâ€ against which the ideological and coercive forces of the state, and of the English Defence League, are pitted. The relationship between the brute force of the state both as police and army in doing violence against brown bodies, its systematic legitimation of and concealment of that violence, and internal fascism that presents itself as a threat to that state, is complex, but very real -Â a fact that Tommy Robinson appears to understand quite well, butÂ Tony Blair still does not.

The aftermath of the murder of a soldier in a â€œHelp for Heroesâ€ t-shirt in Woolwich has brought into relief some of the more ghoulish manifestations of that relationship in both the ideology of militarism in general and within the army: two former soldiers are in court accused of the firebombing of a mosque in Grimsby, just one of a series of increasingly monstrous â€˜reprisalsâ€™ by the far-right; a soldier has kept anonymity and escaped with demotion after being involved in having an Afghan man photographed holding a sign saying â€œsilly Pakiâ€.

The systematic dehumanization of the occupied other does not start or end here: an American soldier convicted of rape and murder in Iraq claims not to see Iraqis as human; US officers are instructed to understand the war as a war against Islam and contemplate the obliteration of Mecca. This is all not to mention the alleged torture and harassment by British security services of one of the men accused of the Woolwich murder itself.

Itâ€™s extremely easy to see, then, how the idealisation of and unconditional support for the military evident in the â€œheroicâ€ support-the-troops rhetoric elides its role in the perpetuation of white supremacy and its violence against colonized and occupied peoples globally (and the armed forces’ attempts to distance themselves from far-right groups like the EDL can only, in this context, appear preposterous). Any meaningful response to racism must address this role and cannot simply parrot the dangerously disingenuous hypocrisy of the liberal stance towards the armed forces.

But why ASAB? The similarities of the structural character of the police and the armed forces generally are obvious: both form the organizations responsible for conducting the direct violence necessary for the preservation of the nation-state and existing political-economic order. Both are built on hierarchy and authority. Both are systematically and virulently racist. For every soldier caught sharing theÂ â€œusually privateâ€ racist attitudesÂ that characterize imperial occupation, there is a police officer to be recorded telling a black man he â€œwill always be a niggerâ€. For every ludicrously unsatisfactory punishment, for every cover-up in the Army, there is one in the Met. Military justice is to justice, as the saying goes, as police justice is to justice.

This all being said, we assent to ACAB. So why not ASAB? 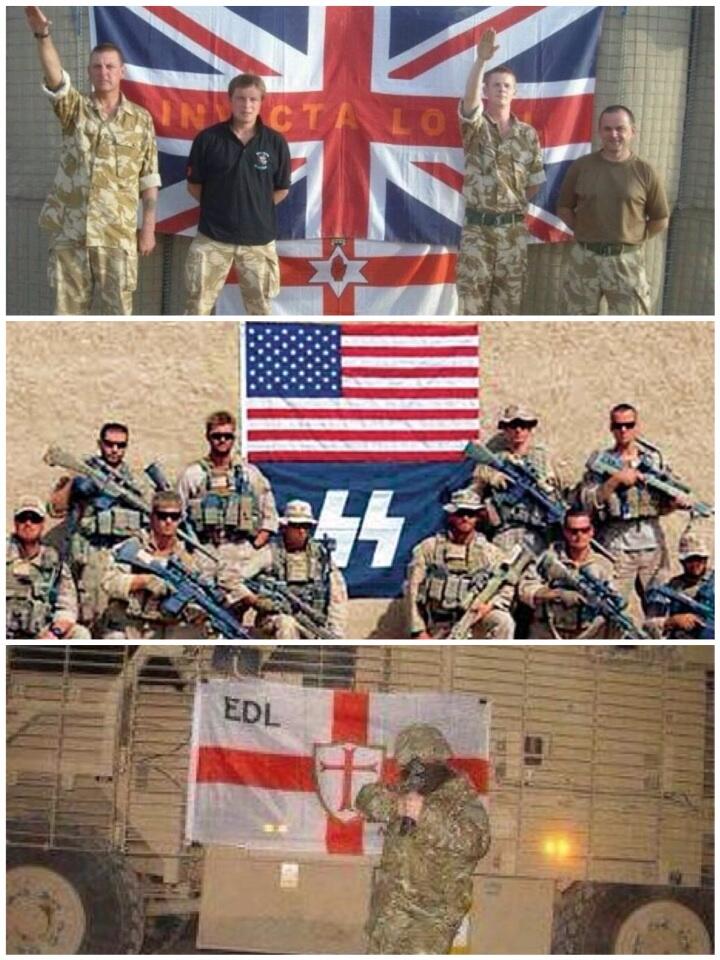 Well, we cannot, to be sure, ignore the highly exploitative, manipulative, and class-biased recruitment practices of the army, the disregard with which the state treats soldiers even as it benefits from their idealisation, the overrepresentation of veterans among the homeless (whom the state helps create by defending private property, and whose persecution the police happily carry out), the exploitation by the state of charitable feeling for veterans in the very form of Help for Heroes in order to relieve itself of responsibility towards them. The abiding cultural memory of this fact, Remembrance Day, has today all but lost its signification of the â€œpity of warâ€ and become yet another nationalist glorification of â€œsacrificeâ€ on behalf of the state. This is part of a wider disregard for the consequences of the violence of armed conflict: states systematically encourage the circumstances which result in the litany of abuses above, which are indeed a necessary implication of the horrors of war, and do nothing whatever to acknowledge their responsibility for and complicity in these crimes. As ever, a violence which is structural is individualized.

The relevance and character of these problems for the modern armed forces is not necessarily comparable to that of the armed forces of the First World War, however: while ideological misdirection and substantive misinformation certainly play a significant role in directing recruitment into the armed forces today, they by no means amount to conscription; meanwhile, the changing contexts of domestic politics, nationalism and the nature and culture of war make any direct translation of the situation of soldiers in WW1 to today virtually impossible. And this is all, for the most part, much the case in the police as well (who need hear another cry of â€œone bad appleâ€?): while the everyday violence of policing in the UK is rarely comparable to the worst excesses of armed combat, ideological misdirection is as strong here as anywhere, and the carrot of police pay no small attraction for those who want to earn good money beating up protesters. While these issues might provide fertile basis for organizing against these toxic strains of state violence, they do not by themselves decide definitively against ASAB.

But the heterogeneity of the role, functions, constitution and situation of â€œarmed forcesâ€ around the world nevertheless makes it extremely difficult to summarize our attitude towards them in the form of such an opaque reduction: where civilian police forces are situated generally in the same relation to the state and society, there are imperial and liberating armies; conscripts and volunteers; armies deployed internally and on foreign â€œadventuresâ€; unitary organizations and networks of â€œcombatantsâ€ with disputed legal status. We should be aware, too, of locally and historically specific conditions which may make distinctions between armed forces and the police highly germane (such as in Northern Ireland). Just as, however, the distinction between soldier and civilian, combatant and criminal, is obscured or entirely disregarded in the service of an ideology of â€œsecurityâ€ (and problematized in its parodic appearance in Woolwich as the apparently random killing by a civilian of an unarmed, off-duty soldier), so is the distinction between army and police force; particularly as domestic security becomes increasingly militarized and armed forces, especially supranational organizations such as NATO, form the police force of a global legal and political order that supports a global capital, and form the muscles of the complex organism of racial oppression.

The caveats and qualifications one might want to make to ASAB in this light go far towards demonstrating its inadequacy as the first or last word on the matter. But ASAB points to the very necessary structural critique that must be levelled against the role of the British and other armed forces in the perpetration of oppression both at home and abroad: the demands that any serious claims to internationalism, to anti-fascism, and to anti-capitalism make upon us with regard to the armed forces; the solidarity that must be upheld with those they kill, dehumanize and abuse; and the necessity of identifying who has chosen to be against us.


What’s this “trigger warning” rubbish? Do you think your readers are pathetic wusses?