Voyager Speaks: Reasons Why I Love The Sun Newspaper (Part 1)

Your New Worst Nightmare Melodramatically Brought to you By The Sun

To tell you the truth I’ve been too scared to write this article. Â For over 3 weeks now I’ve been literally shitting my pants. Â I’ve been laying awake at night, heart beating, nipples pressed against my t-shirt, as the whole nine runs laps of terror through me.

It’s this absolute fear that eventually brought me to my knees and keyboard, tapping away till my piece was done. Â God you’ve got to hand it to The Sun, when I turned the page that fateful day on Thursday 23rd May, I had no idea what I was in for.

Up until that creased paper moment The Sun had been its usual chirpy self. Â Afterwards it became a memorial to my poor little Alice.
Alice as I would later find out, was in fact just a model posing for a picture. 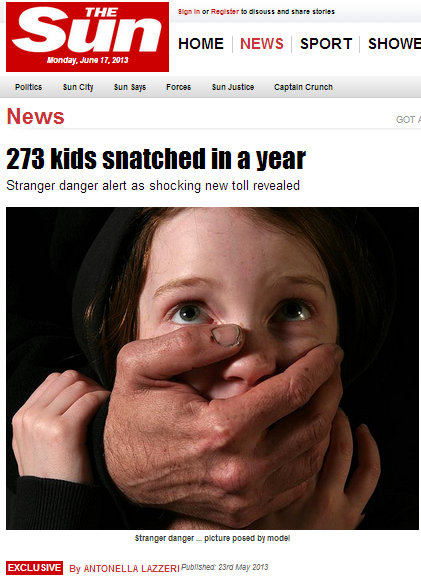 “Alice, Our Lady Trauma”, the Patron Saint of Hysteria.

You see “Alice” represents not just the 592 incidents of children reported as abducted in the UK, but more importantly she represents the 273 of these kids who are snatched by predators. Â When I viewed this word predator, I must admit there was a part of me which licked its lips in shame and anticipation of a juicy tit bit. Â Do you think I’m weird? or am I just prey to be manipulated.

I remember a headline once which went Â ‘It Was The Sun Wot WonÂ It’, after Labour lost the 1992 election to the Conservatives. Â Well on this occasion ‘It Was The Eyes Wot Done It.’ Â Frozen eye sockets of white panic as my poor little Alice stared out from beneath the headlines screaming ‘273 Kids Snatched In A Year.’ Â  Antonella Lazzeri’s article was based on a report called“TakenÂ – a study of child abductions in the UK”Â by Geoff NewissÂ [gathered from statistics collected from UK police forces for 2011/12] on behalf of the Child Exploitation Online Protection Centre and Parents and Abducted Children Together. Â The report was released to mark International Missing Children’s Day, which took place on Saturday 25th May (2 days after the original article).

But who cares? Â Who really cares if this an accurate report or not? Â Or about the deeper complex issues surrounding child abductions. Â Not me I am a couch potato who has just slid off the sofa onto the kitchen table after watching a badly acted soap opera and is emotionally primed to be tossed and turned by more warped storylines.

No what I care about are trigger words like ‘sexually motivated’, ‘stranger danger’ and my personal favourite ‘tip of the iceberg.’ Â This one being a gateway to so many twisted turns and fantasies as you imagine every corner a launch pad for sexual deviancy. Â Given that the true number of annual abductions are probably vastly under reported. Â  So all you unemployed, disabled, Albanian people smugglers beware, I am now watching you and footballers too.

No I don’t care about details, I care about fear, helplessness and blind reprisals and accusations. Â I care about the dead hands of Jimmy Savile, Fred West, The Jolly Green Giant Â or whatever twisted villain my brain can conjure up. Â As those young innocent, pre-pubescent and kidnapped eyeballs chase me from room to room. Â I whisper those immortal lines from Apocalypse Now, “the horror, the horror.”

I, the prey, am now trapped where there are big greedy hands gripped around Alice’s face. Â Alice who plays outside your window, skipping and hop scotching like street urchins in the Pathe News reels during the Blitz. Â These hands have brutally chipped nails with fungus and cuts dotted around them, along with pimples and hairs. Â Oh the Grimm bad guy nature of those panto hands [“He’s behind you!]. Â  Â TheyÂ make me doubt my manhood, my ability to be great protector as kids are snatched right under my nose dragged into a pissy stairwell and raped. Â Long gone are the evil forests of old cordoned off by green belts.

Now how can I be sure I would chop down the beanstalk and kill the giant, rescue Hansel and Gretel. More likely I would sit impotent in front of Facebook and watch as innocence is lost. Â It’s more drama Â than it’s worth anyway, adults must be cautious too. Â I was worried of being charged with assault for trying to intervene or worse still be wrongly accused of paedophilia myself. Â It happens you know, I’ve read about it before in the Sun.

Pinned down without a hope of escaping, I can now comfortably detach myself and wonder atÂ the ruthless calculated genius’ reckless enough to produce such a picture. Â The hands keep tightening and the eyes keep bulging, but I am all the while really [despite my screams], able to caress myself within the knowledge of being somehow entertained. Â I can sub consciously wriggle, giggle and torture myself with hysteria.

I love the Sun and the fact I can look at Alice, see every parents’ worst nightmare and disregard it like a chugger on the high street. Â After the final page is turned and the amusement ride is over I get off. Â 3 weeks later I can look back and see all the loops I’ve been through and how I ended up here.

Being lured on by those eyes, trapped in a cage spun 360, then let off on the other side. Â I crawl back onto my sofa glare out the window, pick up the remote, feel hot flames of disgust whenever I hear the word ‘snatched.’ Â From where this comes from I don’t know and I lie there and wait as the telly switches itself on, just in time for the next thrilling instalment of ‘Stranger Danger Alert.’ Â I’m deeply outraged and thrilled!


WTF is this crap?