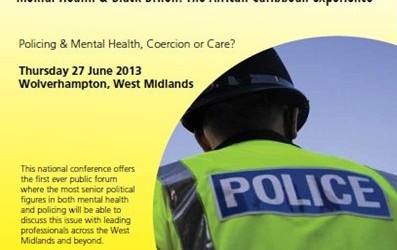 This event is scheduled to take place at the Molineux Conference Centre in Wolverhampton, on Thursday 27th June 2013.

EntitledÂ Policing & Mental Health, Coercion or Care? ACCI & BMH UK National Conference 2013,Â this event offers the first ever public forum where the most senior political figures in both policing and mental health Â will be able to discuss this issue with leading professionals from the statutory mental health and social services, the police, local authorities, commissioners, the charitable sector as well as service users and community agencies from across the country.

People who use mental health services account for 50% of those who lose their lives in police custody. It is in the area of mental health and policing that many of the most serious causes for concern have arisen over a number of years but continue to remain unadressed.

Professionals responsible for running or commissioning mental health services, who attend this conference, will learn first-hand what action needs to be taken to improve the treatment of this patient group. Delegates will find out how joint working and investment in front line community based services like ACCI, is critical to bringing about improvements in patient experience and professional practice in this important area of mental health care, which crosses policing, mental health and social care professional arenaâ€™s.Â

To book a place for this one day eventÂ