There will be no hiding place for illegal immigrants with the new #ImmigrationBill pic.twitter.com/HH2JGDKnRq

You were warned, it was a long time coming. From the Conservative’s 2005:Â “Are you thinking, what we’re thinking?”, to Labour’s 2010 Manifesto section titledÂ “Crime and Immigration”Â Â to the “Stop the Open Door EU Immigration” of Â UKIP. More immigrants are caged into dog-like pens for having the temerity to exist without state approval. It is not racist to define the presence of Asian and African migrants as an inherent “high-risk” problem. To proveÂ to the ordinary voter that life isn’t that bad, Â immigrant round ups were needed to become more public. This is a clear sign of a desperate and struggling elite.

George Osborne declared in April that Britain’s economy is “healing”, but in more honest terms, based on the Government’s optimistic predictions, Britain’s economy looks fucked. The national debt, which we were told had to be tackled to avoid a Greek style economic crisis, rather than starting to fall by 2015/16 is now set to double from 2010 levels. Austerity is no longer the temporary blip ending 2015 but will go on until at least 2018 and is increasinglyÂ likely to become permanent. This is not the recovery that the Coalition promised.

It is not all bad news though. The Sunday Times Rich List, over the last year, saw their wealth rise from Â£414 billion to Â£450 billion. Â Osborne also must be thankful that last year, the British bank HSBC was saved from prosecution, after being caught by the US Justice DepartmentÂ laundering money for Al Qaeda and Mexican drug cartels. The US Government decided to make them pay out record fines which barely dented their annual profits. Clearly it is better to charge fines than allow corporate suits go to jail and risk the global economy.

So while some are “Too Big to Jail”, others are small enough to be offered up at the altar of fiscal discipline and stamped out of existence. The deficit reduction strategy is to make those who have very little have even less. With the double dip recession re-evaluated as a miscalculation, the Government now boasts that the cuts are working and growth is emerging. Indeed, there is growth, the rise in disabled suicides and deaths,Â growth in the food-banks, the number of parentsÂ foregoing meals in order to ensure their children do not starve. But these details become banal when you can sleep on a full stomach.

Politicians easily ignore and put aside the violence of making young people and families homeless through housing benefit cuts and universal credit. But now an election is soon approaching, Â a new distraction is needed for the masses to project their anger and bitterness at the suffering Â they are told to endure for the good of the economy.

Cue the immigrants. We, whoÂ look and/or sound different, provide a convenient avatar of hate. This is our role. We are the fig-leaf to cover the modesty of the Coalition and Labour’s economic policies.Â It is no longer about biological stereotypes of race, in the 21st century, the liberal elites like their discrimination to be more sophisticated, that is, based on cultural factors instead of biological. 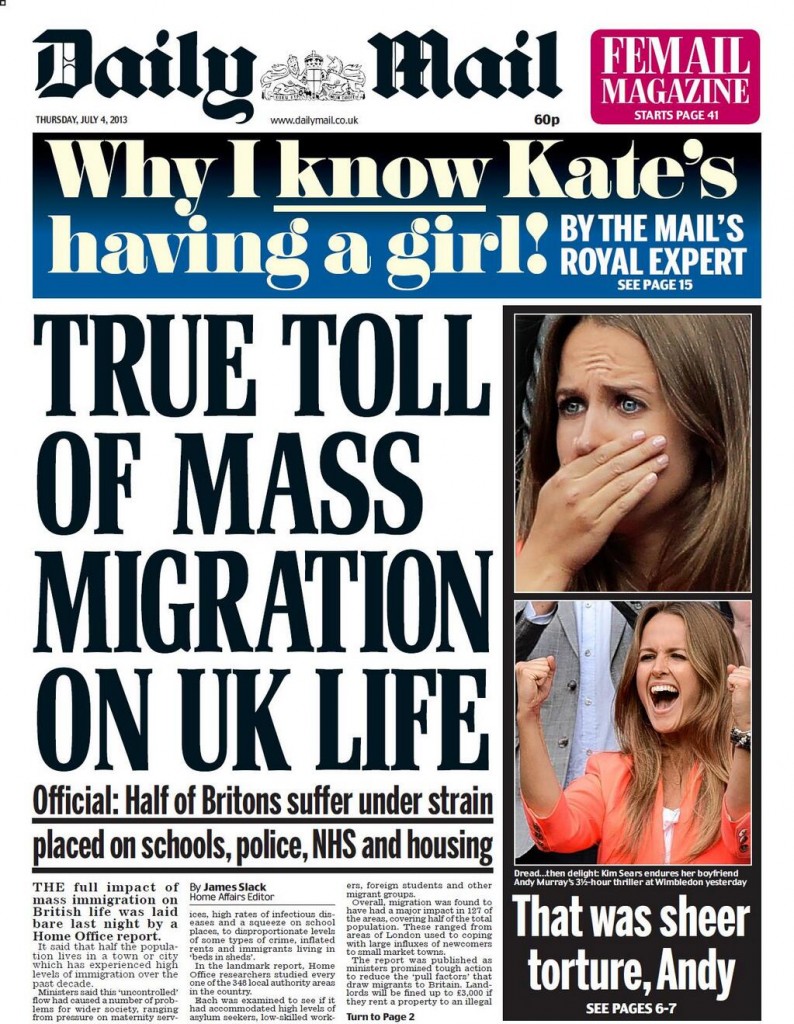 While “Racism” is horribly passÃ©e, Xenophobia is in vogue. Here are the lessons that we must learn:

It is not dog-whistle politics when you can hear the xenophobic klaxon. We, the black, the migrant, can’t call it “racist”, as the definition of the word has been taken away from us. What is “racist”, is the hatred of the other, based on their biology, their skin pigmentation. Apparently it is not racist to the deny the basic humanity of those who were not born in the same artificial nation-state that you Â happened to find yourself in. We are instructed that “racism” is the murder of Stephen Lawrence, but not the state-orchestrated death of Ama Sumani, a Ghanaian woman who had children in Britain but was sent to die because of a bureaucratic oversight. Nick Griffin is showcased by liberals as the epitome of the politics of “hate” but apparently there is nothing hateful or racist about the murder of Jimmy MubengaÂ and treatment of asylum seekers.

As the rise of the fascist party, Jobbik, in Hungary and the growth of the far-right across Europe illustrates, the distinction from liberal democracy to fascist authoritarianism can narrow swiftly with each xenophobic impulse and policy.

I, as a second generation immigrant, am aware of the bigotry my parents and their generation faced when they arrived on this soggy island. However I am continually dismayed at how quickly history repeats itself even amongst my peers. It goes like this:

“The settled [migrants] are ok, they’ve put the time in, they work in the NHS and make it great. But it is the new ones, they are the problem. The Albanians/the Afghans/the Eastern Europeans/the Asylum Seekers/the Muslims… the ones ‘we’ didn’t invite.”

But these ideas do not come from our lived experience, it comes the national political discourse. Racism is not an ideology from working class communities, it is systematically created and perpetuated from the top of society in order to divert attention from their own failures. Immigrants, time and again, are the sacrificial lambs to cleanse the sins of our leaders.

We have seen the generosity of Britain’s civilised society, when migrants are hungry and homeless, the police coordinate raids to steal their sleeping bags and donated food parcels. When we are peacefully disobedient, we are faced with deportation, when we are dying, ill or Â in need of care, we are called “health tourists”. When we work for nothing, we are condemned for making the settled population look lazy, when we don’t work, we are a “burden”. Â The National Socialism of One Nation Labour doesn’t oppose a cap on migrants nor the cuts that are currently being imposed and disproportionately affect black and migrant communities.

Are you thinking what we are thinking?


[…] who look and sound different to the white politicians who are pushing them through. So I wrote this piece to explain some of my […]


Great article Justin – tears the propaganda out of its wrappings and lets the blood drip. V useful your distinction between racism and xenophobia, which is indeed happening now in the UK, and national socialism on the march throughout Europe. Judith xx