While the term â€˜fascistâ€™ is often bandied around a little too freely, I can think of few who deserve the label more than Narendra Modi,Â current Chief Minister of Gujarat, in western India.

In 2002, Chief Minister Modi presided over several days of violence against Muslims in the Gujarat region, in which over 2,000 people were killed and many Muslim women were systematically and brutally raped. While there have been attempts to brand these attacks as â€˜communal violence’, in which Muslims and Hindus were equally matched participants, there is clear evidence – coming from bothÂ Human Rights WatchÂ andÂ Amnesty InternationalÂ -Â that the violence was orchestrated and sponsored by the state. Hindu supremacist mobs linked to the BJP (the Hindu nationalist party who governed Gujarat) murdered and raped, selectively targeting the addresses occupied by Muslim families. Several witnesses reported being told by police: â€˜We have no orders to save you.â€™

According to a leaked report by the British High Commission in India the violence ‘had all theÂ hallmarks of ethnic cleansingÂ and that reconciliation between Hindus and Muslims is impossible while the chief minister [Narendra Modi] remains in power.â€™ Indeed, on this basis the British High Commission held a 10 year diplomatic boycott against Modi until 2012 when the new â€˜growthâ€™ agenda trumped any moral solidarity with the British citizens who died in the 2002 massacre. Currently, Modi is making a bid to become India’s next Prime Minister and has launched a campaign using openly fascistic and anti-minority rhetoric. 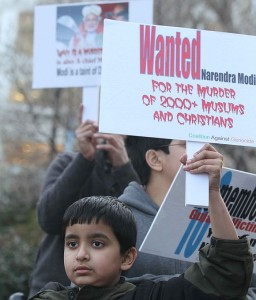 Given this unequivocal damnation of Modi by British and International institutions, he seems a dubious candidate to be invited to speak at the House of Commons. Yet Brent MP Barry Gardiner, on behalf of Labour Friends of India has invited Modi to come and address the House of Commons on the subject of ‘The Future of Modern India’. Modi claims to have brought development to Gujarat â€“ but the reality is that nutritional poverty is higher than all-India levels – and there is a huge and growing gap between rich and poor in the state. The people of Gujarat are paying the price for Modi’s policies, in which swathes of land and coastline have been converted into Special Economic Zones or Special Investment Regions and handed over to corporations heavily subsidised by the state. Modi has opposed a national plan from 2007 to set aside 15% of development funds for Muslims, claimingÂ it would threaten the ‘social fabric of the nation.’Â His appearance in London is merely a cynical attempt to help British corporates sell their products and services in Gujarat in the interests of larger profits.

While Britainâ€™s â€˜special relationshipâ€™ with the United States may be becoming momentarily strained over Syria, it is clear that British politicians are cultivating other alliances, with states that are no less troubling than the USA. On a more local level, the British establishmentâ€™s tacit approval of Modiâ€™s genocidal politics sends a clear message to British Muslims, that Islamophobia is a global problem in which Britain will continue to participate. Though his invitation is abhorrent, arguably, Modi is a grotesquely apt person to speak on â€˜The Future of Modern India.â€™ His Islamophobia, corporate priorities, and backing of influential friends in Western governments may well be representative of what is to come for the worldâ€™s largest democracy.


When someone writes an piece of writing he/she keeps the image of a user in his/her mind that how a user can know it.
Therefore that’s why this article is great.
Thanks!