Notes from Stockholm: the darker sides of Swedenâ€™s identity crisis

It was a situation I’d not experienced before. As a white Englishman, I’ve had the privilege of never having attended an anti-fascist demonstration as one of the demonised immigrant workers that the far right wanted to boot out. But on Saturday 14th September, two weeks after moving to Stockholm for work, the unashamedly neo-Nazi Svenskarnas Parti (The Swedesâ€™ Party, SvP) was planning to march through central Stockholm under the banner of â€œA Thousand years of Swedishnessâ€. I heard this news just a few days after the EDL had tried to march through the multicultural London borough of Tower Hamlets, observing with horror the news of nearly 300 antifascist arrestees, and immediately knew that attendance at the counter-demonstration was important.

We tend to imagine the Scandinavian countries as wonderful models of social democracy in action â€“ relative social peace, low levels of inequality, rent controls, progressive policies on health, education and so on. But over the past decade or so, Swedish politics has taken a rather different turn. With the second right-wing government since World War II, and the first to be re-elected for a second term, Swedenâ€™s ubiquitous social democracy is being systematically dismantled by the ironically-named Moderaterna (The Moderates). This hotly contested rolling-back of the countryâ€™s imperfect but generally quite progressive policies on welfare, immigration and public ownership has come at a time when the rest of Western Europe is feeling the bitter effects of a neoliberal crisis, and political and ethnic tensions are rising almost everywhere in the region.

Swedenâ€™s resurgent right wing, however, is not simply a case of a centre-right conservative party gaining political office; itâ€™s also ushering in an era of some of the largest far-right and neo-Nazi parties Europe has seen in some time. A chronic shortage of housing in Stockholm, and growing racial tensions leading to this yearâ€™s riots by immigrant communities in Stockholmâ€™s working class suburbs, has exaggerated the far-rightâ€™s ability to influence public discourses. Debates on Swedenâ€™s future are increasingly being reframed to the right, providing the political breathing space for the Moderaterna to be more assertive in its own neoliberalising ambitions. 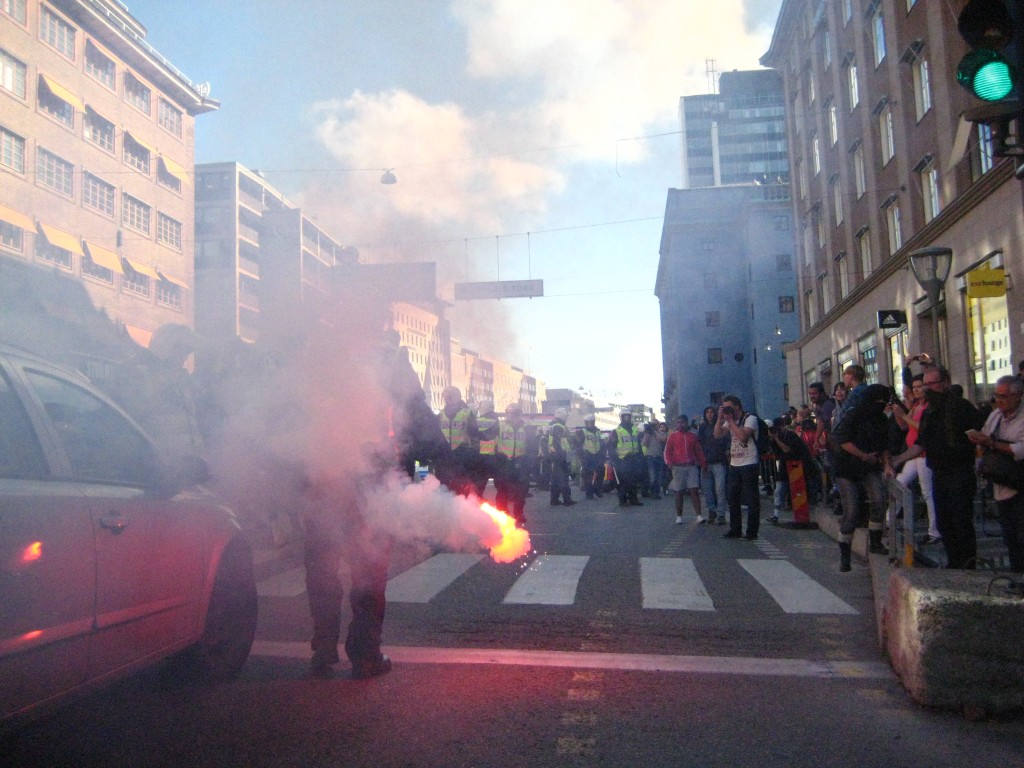 On the streets of Stockholm, antifascists swamped the SvP by at least four to one; the size of their 150-strong march bulked out by a hired van and generous spacing of flag-bearers. The counter-demonstration, â€˜Vattenkrig mot Raskrigâ€™ (Water War against Racial War), was billed as a playful dÃ©tournement of the usual set-piece scuffles, confrontations and mass arrests of anti-fascist actions here in the past. Instead, the organisers encouraged people to bring water balloons and pistols to soak the fascist marchers every step of the way.

But the tensions in Swedish society appear to run too deep for such playfulness. Although there was relatively little chance of direct confrontation between the two groups due to a heavy police presence, the water bombs were accompanied by stones, firecrackers, bottles and flares, alongside a ceaseless barrage of verbal abuse. Down every side street the SvP passed, another group of counter-demonstrators hassled, abused and showered them with objects. And after the march, isolated fascists were picked off by roving bands of antifas in the backstreets. Even if it was not a total victory for the antifascists, it was a miserable defeat for the SvP.

But these are minnows in a sea of Swedish far-right groups. Arguably the most dangerous, the Sverigedemokraterna (SD, the Sweden Democrats), has a membership of 10,000 in a country of only 9 million, with 20 seats in parliament and a major voice in public debate. Like UKIP in Britain, the SD is especially troubling because its knee-jerk â€˜kick-em-outâ€™ populism appeals to broad sections of Swedish society, from all different classes and backgrounds. Whatâ€™s more, their particular brand of authoritarian, racist jingoism is just about palatable enough to the mainstream that it can’t quite be labeled as â€˜fullyâ€™ fascist.

The rise of the far right in Europe is a worrying trend, linked to economic crisis, growing mobility, labour market change, and all sorts of other factors. We see parties like Golden Dawn sending out their bootboys to attack progressive and radical groups, ongoing support for the Front Nationale in France, and nasty, street-based groups like the EDL trying to throw their weight around. On Saturday, if it wasn’t for heavy-handed policing, the SvP would have been ripped to shreds, but the bigger threats are the â€˜respectableâ€™ hard right parties who fall just short of this politics of the street. We can physically damage the hardcore neo-Nazis on the streets as much as we want, but while parties like the SD and UKIP get away with it, we are in difficult territory. The street battle was easily won this time in Stockholm, but the ideological war is far from over.

Thanks to @ChrChristensen on Twitter for pointing out a factual error in an earlier version of this.