On 28th January 2009, 800 British engineering construction workers went on wildcat strike at the Lindsey Oil Refinery. In the days that followed, 3,000-4,000 more around the UK followed suit. The strikersâ€™ demands seemed clear in the media: they wanted an end to the use of â€˜foreignâ€™ workers on UK building sites.

Both left and right were divided. From the left, this was a group of industrial workers undertaking self-organised, mass, unlawful, indefinite action. It was a leftyâ€™s fantasy. Yet they also seemed to be making the exclusionary, nationalist, and racialised demand â€˜British jobs for British workersâ€™. Leftists bickered, stuttered, argued, and even picketed each other. On the right, commentators and Little Englanders were gleeful to see a group of people appearing to demand more or less what they had been advocating for years[i] â€“ close the borders, boot out â€˜Johnny Foreignerâ€™, build national pride. But it was being articulated by a bunch of working class union thugs illegally taking matters into their own hands[ii].

The strikes stretched across January and February, and brought otherwise hushed discourses to the fore. Should the UK government protect British citizens in the labour market? How, and to what extent? Are the strikers justified? Is their cause a noble one or just an eruption of knee-jerk â€˜pub racismâ€™? Iâ€™m not going to comment on the ethics of the strikes, nor am I going to say much about its unfolding or successes/failures. A lot of that has been hashed out many times. But a closer reading of the strikes tells us about how capitalist processes and state policies pit workforces and nationalities against each other, and divert grievances away from bosses, governments and the ruling class.

Some context: regulation and deregulation collide

The non-British workers brought onto the Lindsey site were in fact not Polish, Pakistani, or any of the usual scapegoats for unemployment and low pay â€“ they were Italian and Portuguese working for IREM, an Italian company. As long-standing members of the European Union, their states of origin were as much implicated in the processes that led to the disputes as their British counterparts.

EU common market policies orbit the neoliberal notion that goods and capital (and sometimes labour) should be able to travel freely between member states, moving with the ebb and flow of supply and demand in a fast-paced capitalist economy.

The workers themselves were also highly mobile, moving from job to job around the EU and far beyond. In many senses, these were the elite of the construction world â€“ well paid, highly skilled, and, in the UK, protected by the union-negotiated NAECI agreement that dictated the minimum pay and conditions. The terms of NAECI (National Agreement for the Engineering Construction Industry) were supposedly protected by UK law. Moreover, the EU Posted Workers Directive (PWD) meant that any migrant workers in a country should be given the same minimum working conditions as citizens of that country.

But there was a catch in the PWD, which allowed IREM to undercut their UK-based counterparts by meeting the conditions of the PWD but not the NAECI agreement. By fiddling their staffing, lower-grade (and therefore lower-paid) workers were doing higher-grade tasks. This allowed them to undercut competitors, offering the main contractor at the refinery a cheap deal they couldn’t refuse. And because of EU free market policies, there was no legal way to oppose the contract.

British and non-British workers alike were squeezed between state regulatory frameworks and a pitiless free market economy. For the British, their conditions were being undermined by cut-rate migrant labour, and for IREMâ€™s workers, many were putting their lives at risk by doing work they were not trained to do. Although both workforces were on the receiving end of these process, they were driven apart by the failure of the PWD to secure the same working conditions for citizens of different states. And so, a dispute largely about pay and conditions became racialised. 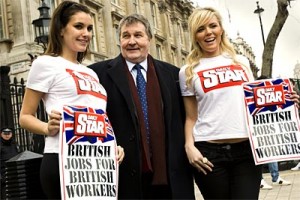 Around the UK, the media quickly rumbled into action and everyone took notice. Immediately, true to form, they scrambled for a single spectacular narrative of what was going on. Something sensational and capable of shifting papers or getting eyes fixed on screens. Within hours, the media and politicians seemed certain of what the strikers were after â€“ this was a bunch of predominantly white, working class men waving Union Jacks. They had tattoos and some held placards demanding BRITISH JOBS FOR BRITISH WORKERS. What could it possibly be, other than a strike against â€˜foreignersâ€™ taking â€˜ourâ€™ jobs?

The Guardian wagged its finger, the Mail rubbed its hands, and the politicians waved their papers in the Commons, but none could quite chisel out a clean, simple narrative for their stories. Everyone had an opinion, yet no-one quite knew what was really going on, or why. The voices of the strikers were drowned out by everyone elseâ€™s chattering. And when they were given voice in the media, they were misquoted[iii] [iv] in order to keep their singular, racialised stories alive.

In fact, there was an extremely wide range of opinions voiced by the workers, and their unions, which is partly what made it so difficult to craft these singular public discourses. The Unite union General Secretary, Derek Simpson, posed awkwardly with a pair of young women holding â€˜British Jobs for British Workersâ€™ placards for the Daily Star (see pic). In contrast, local Unite and GMB activists were putting together a very progressive set of demands[v]. While some workers complained online that they were getting â€œshafted by ethnics and eastern Europeansâ€[vi], others were angered at their workmates when they heard â€œthe type of nationalist crap u can expect to read on a BNP leafletâ€[vii].

On the picket lines, too, when the BNP paid a visit they were swiftly booted on their way, while the flag-waving and â€˜British Jobsâ€™ slogan continued nonetheless. For the initiators of the slogan, this was an act of throwing back in Gordon Brownâ€™s face what he himself had demanded as Prime Minister in 2007[viii]. Others, however, were already â€œgetting sickâ€[ix] of it within the strikeâ€™s first week.

Yes, there was a strong knee-jerk reaction among some strikers against the use of â€˜foreignâ€™ workers, in line with the media portrayal, but there were also many voices involved, some of which were progressive, ambivalent â€“ sometimes even quite radical. But in the search for a singular narrative to shift newspapers and win easy votes, in â€˜officialâ€™ public discourses, it was the race card that won the day.

As onlookers concerned with social justice in all its class, racial, gender and myriad other forms, a simple question rattled around many of our heads at the time: do I support it, or do I oppose it? Perhaps, with hindsight, this was not the right question to ask. Itâ€™s not possible to think of struggles like those at the Lindsey Oil Refinery as inherently good or bad, because they are made up of too many different voices. We like to pigeon-hole political phenomena into neat little boxes, for ease of understanding the way the world works, but the world is much messier than that.

What was really taking place among the strikers was the raw effects of a capitalist free market intersecting with the British state as a vehicle of national identity and UK/EU law. Lindsey saw the mish-mash of class and national identities that inhabit us all in varying constellations explode into the public realm, warts and all. The media and politicians chose to focus on nationalism, conveniently ignoring, or diverting our gazeÂ  from, the way free market logics of capital actively nurture ethnic and national antagonisms.

The etymology of the word â€˜radicalâ€™ is about getting to the roots or origin of something. Our first task in these politically ambiguous struggles teetering on the edge of racism, must, then, stay true to this tradition of radicalism. Interrogating the processes and root causes of national or ethnic conflicts can lead us to deeper understandings, stronger arguments, and better responses. The Lindsey Oil Refinery struggle is long behind us now, but amidst growing racial tensions and intensification of austerity agendas, we can look back and learn important lessons about how to unearth and fight the political-economic processes that drive divisions among working class people.

Acknowledgement: this article is a spin-off from a project at Glasgow University that was run by the author alongside Andy Cumbers, Dave Featherstone, Danny MacKinnon and Kendra Strauss. It doesnâ€™t necessarily reflect the opinions of the other researchers.