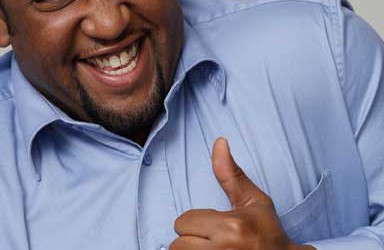 Itâ€™s 2013, a bustling Monday night and autumn has finally started eyeing up winter clothing.Â  Inside my chosen venue, the walls are lined with baby-faced images of the alternative comedy elite: faces who make you laugh, but with a clear conscious. Up there, in their pre-pubescent glory, Baddiel, Skinner, Merton, I kid you not, are looking shaggable. Â Finding a seat is proving tricky as a huge pink elephant has crashed out over an entire section of seating and a massive area is cordoned off with hazard tape. This can only mean one thing: Â this is a fundraiser event for The Comedy School, raising money for their work with â€œtroubled youthâ€. With a line-up of exclusively BME stand ups, all Comedy School alumni, the night promises to be a glimpse into the future of black comedy,

The night begins, and in a voice tinged with sadness, comedian Judith Jacobs draws attention to the death of Felix Dexter. A tragic loss of comic genius, he was one of the few black comedians to escape an over-reliance on their country of origin for bad impersonations of grumpy relatives.Â  Dexter also side-stepped the often botched, cut and paste, of black US urban culture onto a UK landscape: a landscape littered with â€œfuck youâ€™sâ€, â€œmotherfuckersâ€ and my personal fave, â€œfuck dat shitâ€.â€™

The lights dim, the spotlight lands, the stage is set for fight night.Â  Quincy, the compere, is doing well, warming up the crowd, who, we learn, are bunch of students: birthday celebrants with cheapskate friends whoâ€™ve bought her fuck-all for gifts. He grins into the microphone and says something along line of, â€œ…. tonightâ€™s show will cover many topics, but one in particular will raise its ugly head, and its name is Raceâ€. Â Â â€œAh!â€ I think, that explains the elephant.Â  Â Â Quincyâ€™s from the West Indian un-PC school of thought.Â  The crowd is cosmopolitan, but predominately white as he pulls out a generic white accent reminding me of the type Richard Pryor used to use: all nasal and whinny.Â  It sounds as if he should be playing Atlantic City in the early-70s with Smoking Joe Frazier in the front row.Â Â  But the crowd gobbles it up.

Marc Baptiste strolls out onto the stage.Â  Heâ€™s calm, confident, laidback. He never moves, as if stuck to his spot. But he keeps the audience glued to him, too. Â Baptiste is deliberate where Quincy is bold.Â  He delays his punch lines, hypes up the tensions, waits for his bombs to explode.Â  Thereâ€™s a joke about menopause and how doctors named it that way because they were too scared to tell women there was no cure, so itâ€™s just paused.Â  Itâ€™s not his best joke but it sticks with me.Â  Â Heâ€™s the first out, setting up a statement of intent for the rest of the evening.

Next is Manos, the Greek: â€œI no da be cor e tel uz innit.â€Â  Comedy nights are often billed as crucibles of fear, but they are also theatres of support and pretend laughter especially when the comic fails to hit the mark.Â  But every dog has its day so as Manos looks out into the crowd, says heâ€™s Greek and a victim of racism, a deathly silence falls. Then he says, â€œ…knew Iâ€™d get no sympathyâ€. Huge, knowing laughter pours out, all guts, all real.

Glenda Jackson, a cross between Aretha Franklin and Pat Butcher, sets off at a frantic pace.Â  Â With her, itâ€™s non- stop bile and hate, and reminds me of the school playground and cussing contests. How people with bad breathe â€œ…need to stay the fuck away from meâ€.Â  She jokes about porn flicks and men who try to impress women by copying them.Â  Men who take their dicks in and out then all of a sudden their dicks begin to act like slugs, hit with salt, and shrivel. â€œServes you bloody right!â€, she yells, as she does the body squirm impersonation of a shrinking slug. The crowd explodes. One man shouts he can feel a bolt of lightning striking through his penis.Â  Well Glenda, a cutting comment will do that to a man, you know.

The momentum keeps on building and now Ms Jackson is virtually having a heart attack on stage. The crowd respond with even more hysterics.Â  Itâ€™s a tour de force as she gasps for breathe, throwing out one-liners like an asthma attack waiting to happen.Â  The applause is thunderous.

Fun and games over, Â Imran Yusef bounds out.Â  He has a hard job to follow Glenda, but first he has to quell a heckler uprising. A comic can never be seen to be wrong or be seen to be beaten.Â  So Yusef abruptly deploys some of the comedianâ€™s dark arts: speaking really quickly, speaking very loudly, smothering his opponents muffled comebacks, getting the popular kids on side, and eventually the room returns to equilibrium; he is back in control.Â  Imran returns to discuss his early refugee issues.Â  Of being born Asian in Uganda under the rule of Idi Amin, loudly proclaiming â€œ…you know youâ€™re really fucked when itâ€™s black Africans kicking you out!â€Â Â  His style is to be dangerous, to cross the line, making the audience squirm.Â  That said he stays the right side of dangerous with a jokes capturing Muslims, Idi Amin, the Catholic Church and he has the â€˜race cardâ€™ dial.Â  â€œWhite peopleâ€, he says, â€œshould â€˜stop stealing from Africaâ€.Â  Who, in this audience, would dare disagree, so there were plenty of â€œohhhsâ€ and â€œahhhsâ€, and I sit back with respect as the spectacle on stage begins to resemble a matador placing his carefully aimed swords into the dying bull.Â  Itâ€™s the consummate sign of a comedian comfortable with the tools of his trade.

The spotlight now turns to Slimm. From the outset, I am worrying for Slimm, I am finding it hard not to stereotype him.Â  Heâ€™s the classic ragamuffin man, dressed slick, but street, just about to go raving at Pegasus Bar, Lower Clapton Rd in Hackney.Â  I wonder if the audience will get him. His style may be too local for the cosmopolitan crowd, as they still need cultural interpreters, even in a post-Dizzee Rascal world.Â  Itâ€™s an age old paradox: get the most anti-racist, â€˜alternativeâ€™ comic on the planet, with the most â€˜right-onâ€™ material imaginable, put up in front of an all-black crowd and theyâ€™ll die, fall flat on their face.Â  Here, nobody gives a shit about â€˜right-onâ€™, as it sounds fake coming from a face which doesnâ€™t spend any real time in the environment itâ€™s supposed to be in solidarity with.

But then, vice a versa, take your classically-trained-black-circuit-comedian, raised on a diet of The Hackney Empire and Catford Theatre, playing to packed houses of hard-nosed local government workers, IT personnel and bus drivers. Get him talking about â€œme mudda in-lawâ€ in front of an â€˜alternativeâ€™ crowd and straight away the whispers of â€œ…isnâ€™t that sexistâ€ and deconstructions of misogyny and inverted racism begin.Â  Â Thankfully, Slimm is unaware of the rumblings going on in my mind.Â  Iâ€™m just another face in the crowd, even though I swear heâ€™s staring me out. Any minute now heâ€™s gonna ask me for the time, stick a knife out and teef my chain.

But his set begins on the safest of ground possible: kids. I take calming breaths. Nothing can be more universal than the hatred for kids and â€œ…how easy theyâ€™ve got it.â€Â  Thus Slimm immediately gains a genuine connection with his audience drawing you in as he gently rambles along.Â  His style is not cool or rascally or for that matter a fast-paced attack. Instead, itâ€™s pure feel good.Â  Like the Jamaican 9/11 terrorist who decides against getting on the plane, â€œaz it look a bit ruff outside, Mr Bin Laden, an mi quite happy watchin it on the TV, tank u very much.â€Â  Out of tonightâ€™s line-up Slimm is the one I can imagine the most with a Michael MacIntyre type show on BBC1.Â  He marries the worlds of the black comedian and â€˜alternativeâ€™ comedy the best, even though his material is not experimental or even radical.

And so, the last man standing is Kodjo and the closest to the cut and paste I was talking about earlier.Â  Heâ€™s probably the youngest of all the line-up and is heavily influenced by Def Comedy Jam, Chris Rock, Eddie Murphy and Hip hop culture all rolled into one.Â  Nothing wrong with that, but his opening line sums up my gut feeling.Â  â€œWhatâ€™s up white people!â€

Come on brudda, this ainâ€™t New York in the 70â€™s, Â Alabama in the 80s or even Tottenham in the 90s.Â  Weâ€™ve been in this room long enough to know where the furniture is.Â  Weâ€™ve watched each other riot, argue on buses, rave to Chaka Demus and Pliers, albeit in separate clubs. Do we really need this line? Â Is this really the best of your imagination? Isnâ€™t this territory that has been trod to death by earlier comics?

So the show is over and, excepting a few words from the event organiser, Keith Palmer, founder of the Comedy School, I walk up the velvet steps, back into the bristling night, saying a mental goodbye to that pink elephant. Until we meet again, Black British comedy is alive and kicking. Â It has many competent technicians who have learnt their trade well. They know how to work a crowd, but maybe they lack the new observations that capture the 21st century as it springs up around us.Â  You donâ€™t need to be young and alternative to be observant.Â  Tonight has been a funny night, but there are too many hangovers from the past that donâ€™t really tackle the here and now.Â Â  As comedy becomes a career choice for more and more, there is the problem of playing safe, being too polished and going for what will get you by on the circuit.Â Â  The black comic cannot afford to be so lazy.Â  Â Especially when, at the drop of a line, all that hard work spent on developing your stage presence turns into an elephant, and you sound as dated as Bernard Manning. Goodnight white people.