On Friday 12th September, Deloitte, the biggest professional services company in the world, is facing a wave of angry demonstrations outside one of their offices in Central London.

The protests are organised by the contracted cleaning workers at Deloitte, who speak of a culture of bullying, unsafe working conditionsÂ and a disregard for their welfare akin to a “sweatshop”. Last November SERCO, the cleaning services sub-contractor for Deloitte, made a significant reduction to the number of people to work during shifts. The protesting cleaners have highlighted that since then the remaining workers have been compelled to complete an impossible workload. The union that represents the workers, the Industrial Workers of Great BritainÂ have also documented aÂ rapidÂ increaseÂ in sickness-related absences and workplace injuryÂ of their members since the new conditions have been enforced.Â They also allege that some work-related injuries have been so severe that it has left some of their members unable to return to work.Â

Rita (a pseudonym), a mother and cleaner who has been at Deloitte for several years said

“[SERCO management] put too much pressure on us. IÂ sweat, Â I work and I drop and they do not listenÂ us. Am I not human?”

Earlier this year on 4th July, the cleaners, frustrated with a lack of progress, staged their first noisy demonstration at Deloitte’s gleaming offices at New Street Square, the building where one cleaner had recently collapsed in exhaustion. SERCO responded with letter from a law firmÂ and suspended two workers who were present at the demonstration. The union says that these are attempts to scare them into stopping future protests

“SERCO and Deloitte are refusing to respond to workers’ complaints despite a worker collapsing out of over-work during a shift. We will not be bullied or intimidated for speaking up against unsafe and inhumane working conditions. We will stop our protests when SERCO reinstates victimised workers and stops this sweatshop culture.“

Deloitte, a company with a reported fee income of $32.4bn last year, state on their website that they “pride ourselves on being a great place to work”.Â Despite Deloitte’sÂ evident success and billions in revenue, on Friday, the discontented and exploitative strain of their lowest paid workers will soon be seen on the streets of London.

Pictures below is from their first protest which took place at Deloitte’s offices on 4th July 2014. 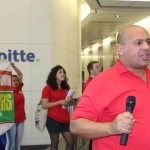 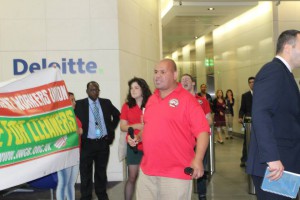 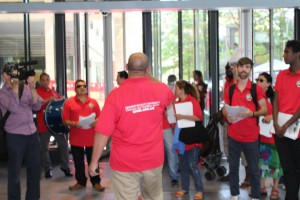 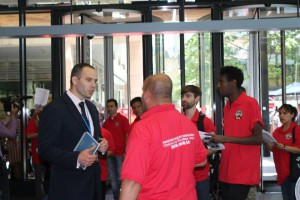 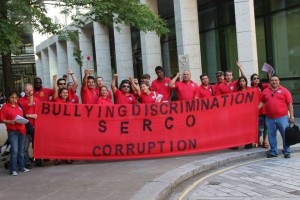