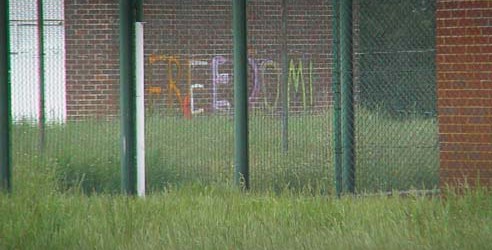 In solidarity with the detainees and their demands.

A detainee with mental health issues is in a critical condition after being beaten up by Mitie security guards at Campsfield IRC in Oxfordshire. Between 60 and 100 detainees have occupied the courtyard to protest against the violence and the inhuman living conditions they suffer during detention.

Around 4pm on 29th November 2014 a male detainee with mental health issues has been left in â€˜a critical conditionâ€™ after he was beaten by guards at Campsfield House IRC, as numerous detainees reported. This marks the second assault by guards against the detainee. Two other detainees were hurt by guards in the ensuing struggle and sustained minor injuries.

TheÂ detainees have occupied the courtyard to protest against the violent treatment of the detainee and the inhuman living conditions they suffer during detention. The protesters in the courtyard were joined by numerous demonstrators outside of the fences and barbed wire surrounding the detention centre who fully support the demands of the detainees.

The demands of the protesting detainees are:

1) Permission to see their friend in order to see what happened to him
2) Release of the (at least 3-4) people forced into solitary confinement
3) Punishment for the guards who beat up the detainee
4) End to inhuman treatment, deprivation of freedom and separation from families

The protesting detainees emphasise that they are â€˜being treated like animalsâ€™ in the racist system of immigration detention. Specific problems are inadequate medical care, low quality nutrition, and separation from their families in the UK. The protesters ask to be treated like humans.

Instead of responding to the demands, the management of Campsfield IRC ordered to put at least three or four detainees who tried to make contact with their injured friend into solitary confinement and confiscated their phones. A visitor who was trying to see one of them was threatened with arrest by the police. Many more detainees were put under lockdown and not allowed to leave the areas where they were being monitored. Afterwards, several detainees were moved to different detention centres.

The incident followed the demonstration “21 years too long” outside the detention centre on Saturday morning. Local, national and international groups have come again and again to protest against Campsfield IRC during the 21 years of its existence.

Background:
Campsfield House is one of 13 Immigration Removal Centres in the UK used to detain over 30,000 people per year. Non-citizen migrants and asylum-seekers are detained indefinitely, meaning that many are detained for months and even years because there is no time limit on detention. Detention is authorised for administrative convenience, implying that non-citizens are deprived of their freedom without having committed any crime. Despite numerous protests against immigration detention, including repeated hunger strikes by detainees, the practice of immigration detention is increasing.

Currently, planning permission is being sought by the government to double the size of Campsfield IRC, which would more than double the number of people subjected to detention in Campsfield from 276 to 556.