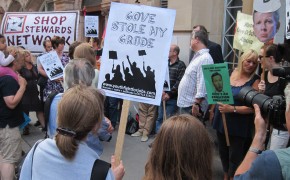 “GOVE IS JUST ANOTHER THATCHER. HE’S AN EDUCATION SNATCHER.”

The Students:
There is widespread anger over last week’s GCSE results as grades have dropped significantly for the first time in 24 years. Through what the exam boards claim to be ‘actions to curb grade inflation’ , we have seen many students receiving D grades this summer with marks that would have secured them C grades […] 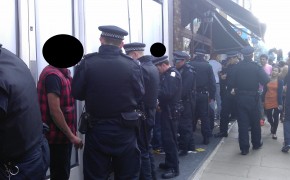 I came to Notting Hill Carnival to party. What I saw made that impossible

By Zoe Stavri
I went to the Notting Hill Carnival to have fun, a nice day out with friends. Instead, I witnessed some of the most racist police behaviour I have ever seen.
We arrived at about three oâ€™clock, and the police presence felt heavy. Riot vans were parked on every corner, the Territorial Support Group (TSG) […]

Michael Wilshaw- sorry Iâ€™m not your Dad.Â I am a secondary school teacher in an inner-city London school. Overall, I love my job. I love the challenge, the creativity and I am passionate about education. Iâ€™m also pretty damn good at it. However, as I came home tonight (carrying a class set of 30 books that […] 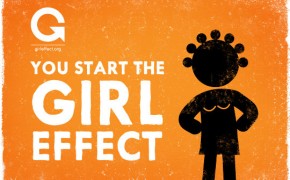 The problems of the “Girl Effect” & Nike Sponsored Feminism

By Lisa Glass / @lisaaglass
Currently, the value of global gender equality is top of the agenda for many WesternÂ governments and organisations such as the UN. The move to empower women and girls onÂ a global scale is obviously in itself a positive step. However, the consequences of WesternÂ interventions in the global South need to be properly […]

Cross-posted From Edd Bauerâ€™s VP Education Blog
The guild of students have just circulated a set of photos for â€œalumniâ€ celebrating guild of studentâ€™s campaigns over the years. This is part of an alumni strategy to build up a alumni network which will generate revenue for the guild. In the selection they choose to celebrate items […]

Without a political base, no amount of protest songs will make a difference – a perspective on Plan B’s iLL Manors

By Daniel Randall, aka The Ruby Kid
Essex rapper Plan Bâ€™s new project iLL Manors (a â€œhip-hop musicalâ€ film, with a soundtrack featuring a soon-to-be-released title single) calls out the government and the right-wing media over the cuts, the riots, the housing crisis, racism and the demonisation of the working class.

The Newham Monitoring Project (NMP) have launched a stop and search hotline as part of their response to this summer’s Olympic Games. Between July and August, the eyes of the world will be on Newham, where most of the sporting action will be taking place. This means that Newham and surrounding boroughs will see a […]

A tribute to Kwame Ofosu-Asare who died from a fatal stabbing in Lambeth, South London
What is touching about the video, is despite the stereotypes of hyper-masculinity, his male friends have no qualms about expressing their sorrow and love for a fallen friend. These bitter and sad experience of losing friends at a young age. May […]

London MP Chuka Umunna, who is Chair of the London Gangs Forum, has spoken out after seven stabbings, one of them fatal, took place in and around his South London constituency between the 25th February and the 2nd March.
There has been a significant recent increase in the number of violent knife attacks in South London […]