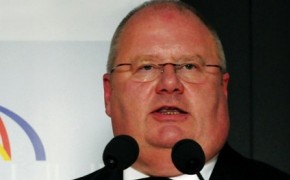 On October 19th 2011, an eviction operation was launched against the traveller community in Basildon by the local council and supported by national government.
Over 100 people were made homeless, dozens of families. Many still remain with nowhere to go, living next to the road of […]

From Traveller Solidarity Network
Tony Ball, leader of Basildon Council and architect of the Dale Farm eviction, was forced to flee an awards ceremony by angry protesters in central London last night.

This is the real face of evictions whether Occupy London or Dale Farm.
UBS’ spokesperson said in reference to the eviction despite the violence:
“We are pleased.”
Absolutely appalling and according the BBC, the police has arrested him.

Source: Felix Gonzales / You and I Films

Saturday 5th November in Whitechapel
Dale Farm: Building the Traveller Solidarity Movement
A meeting of in-depth debate and discussion.
The ongoing Dale Farm eviction does not mean that we as a Travellers solidarity movement have failed. This is only the beginning as the struggle of Travellers all over Britain continues with multiple communities under the threat of eviction. […]

Over the past day, weeks and months, we have witnessed an unprecedented use of force and power towards one section of an ethnic minority community based in Essex. The local police constabulary and Basildon Council have admitted that the residents of Dale Farm pose no criminal threat nor are a source of other social antagonism […]

From dalefarm.wordpress.com:
The Court of Appeal has just rejected the residentsâ€™ right to a judicial review, which means that Basildon Council will be able to come on to conduct an eviction from now onwards. We need supporters to come down as soon as possible to help resist this eviction. We need people to come willing to […]

From Dale Farm Solidarity London (dalefarmldn[at]gmail.com)
On Thursday 15th September, friends and supporters of the Traveller site at Dale FarmÂ in Essex and activists from various campaigning groups will assemble in a flash mob to create a â€œcardboard cityâ€ at the offices of the Department of Communities and Local Government (DCLG).
Supporting activists and groups include No Sweat, […]

A report from Dale Farm

First the government threatened to cut off their water supply and then Amnesty waded in.
Now they are trying to evict the Dale Farm residents and the UN’s office for Human Rights have called on the UK government not to.
When I went there last Sunday, it was evident that it was wealthy neighbouring homes that were […]

“The evictions could start today” – Latest from Dale Farm

From Dale Farm Solidarity
A last ditch effort to stop the eviction at the High Courts has just been turned down.Â  This means that anytime after midnight tonight, Dale Farm could face the bulldozers. Dale Farm residents are defiant, refusing to leave their homes, and supporters from the UK and across Europe are standing with them.