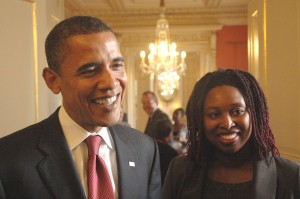 Dawn Butler, the MP for Brent South,Â has become the first ever elected, female, Black minister in the UK. Prime Minister Gordon Brown appointed her as an Assistant Government Whip in the House of Commons yesterday, replacing Siobhain McDonagh MP who was sacked by Brown after publicly calling for a leadership contest.

Butler, pictured hereÂ in July with US Democratic PresidentialÂ Candidate Sen. Barack Obama,Â has won many plaudits and seconded the Queenâ€™s Speech in November last year. Speaking in the Commons about the need to stop demonising young people and to celebrate their achievements, she appealed to young people to become active in politics and said:

â€œif anybody hearing our speeches today or reading about them tomorrow questions whether politics works, whether it matters, I say to them: cynicism didnâ€™t create the welfare state. Indifference didnâ€™t introduce the minimum wage or bring peace to Northern Ireland. Apathy didnâ€™t end debt slavery for worldâ€™s poorest people or give pensioners dignity in their retirementâ€¦that is the difference politics can make.â€

Commenting on Labourâ€™s relationship with the Black community on the Guardianâ€™s websiteÂ in the same month, Chuka Umunna, editor of TMP, said:
â€œThere has been much talk of politicians lacking authenticity and – automaton-like – being unable to talk in a way that connects with the person on the street. Step forward Dawn Butler, one of Labourâ€™s two black female MPs, who won many plaudits for doing precisely the opposite when given the chance to second the Queenâ€™s speech in the Commons the other week. Lets see more of that.â€

Before taking up her appointment, Butler was the Labour Partyâ€™s Vice Chair for Youth.