African migrants are today going to be left homeless after the French Police this morning evicted an abandoned warehouse in Calais that was home to around 80 African migrants from Sudan, Eritrea and Ethiopia. 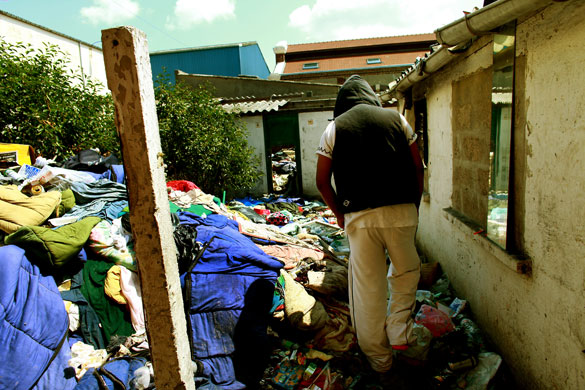 The eviction had been announced in yesterday’s local newspapers for 13:00 today. Most of the migrants had therefore left the building when the police arrived. The police have sealed off the building and have placed a chemical toilet outside for the workers who will carry out the demolition.

It is believed that the warehouse will be demolished later this month, along with half a dozen other empty buildings on the same street, including one home, next door to â€œAfrica Houseâ€, which belongs to French citizens.

Calais Migrant Solidarity activists are however currently trying to help re-house the African migrants in defiance of both the ban on shelter in Calais and the anti-solidarity laws in France.

The French police, working with the UK government, have escalated their attempts to drive migrants out of the French port town through systematic harassment, of which home demolitions is just one tactic. The process of demolishing migrant homes beganÂ publiclyÂ last September with the large scale demolition of the Pashtun â€˜jungleâ€™, which saw 278 Afghans being detained, of which over half were unaccompanied minors. According to Calais Migrant Solidarity, the local Police regularly slash migrant tents and blankets, ransack homes, destroy property, and assault migrants. They also claim that in the last few weeksâ€™ police have kicked prayer spaces, thrown Qu’rans, drawn fascist symbols on the walls, and made monkey noises at migrants. It is believed that a building lying in ruins about 400 meters along the same road from Africa House, which is currently home to Arabic speaking migrants, will be the next home to be demolished.

There are other reports from migrants of police putting chemicals into drinking water and suspected sleeping-pill substances being put into food served while in detention.

CMS activist Kirsty Johnson said â€œit is shocking to see in Calais the similarities in state policies and actions of those used against European Jews in the 1930s, which are now supposedly assumed to be found repugnant.â€

Many migrants in Calais do not have anywhere to go. Kirsty Johnson described:

â€œSome of the other communities who are routinely harassed by the police here include unaccompanied minors from Afghanistan, Palestinians from Gaza, and Iranian migrants. Many have travelled for years to get here, risking their lives, in order to find a home. They have lost everything.â€

â€œThe police chase us every day, but they don’t understand why we are here. All across Europe there are borders that are killing many people who are trying to cross from escaping violence and poverty. Many of us have travelled for years, and many are children. Where can we go? This is not a life.â€ Mohammed, 18, Darfur â€œEveryday police come, take people to prison and mistreat us. Soemtimes they say to me â€œYou are black, you are shit. You need to leave France.â€

6 Darfurian Sudanese individuals have recently been convicted in the French court of law for failing to identify themselves. They were unable to understand the court proceedings as there are 136 languages spoken in Sudan. Around thirty activists from a range of campaigns across northern France attended the trial. The Sudanese are currently in prison at Longuenesse.

“Life on the streets of Calais is the unseen reality of the policies of the French, British and European Union governments that exclude desperate non-EU migrants from accessing the very opportunity that was created out of the historical exploitation of non-European labour and resources.”

However, Jacques Anciot, present at the eviction, said: â€œThey have been met with resistance at every turn. Calais Migrant Solidarity has had a constant presence on the ground since June last year working in solidarity with the different migrant communities and resisting police activity. We demand freedom of movement for all, and the right to stay.â€