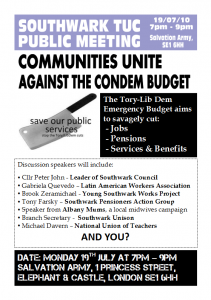 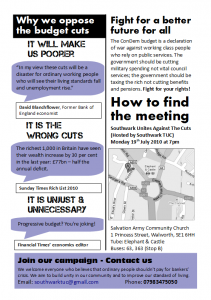 The Coalition Government have declared war against working people and the poor. Despite attempts to dress up the budget as “progressive”, independent economists have given it a damning verdict.

The purpose of the meeting is twofold: first to inform the public about the reality of the harm that the planned cuts outlined in the emergency budget will have in our community. The cuts will come as a shock to many in Southwark, the Coalition Government plans will lead to higher rates of unemployment in the coming years, especially by those employed in public sector.
What is additionally crippling is that it will ensure there are fewer public services that the most vulnerable in our communities rely on. It will also affect child benefit and therefore child poverty, there will be less additional education support in schools, forcing full time carer single mothers to work for free so that they claim fewer “benefits” and also reducing job opportunities for our young people.

Reflections on Britain from the Nordic
February 25, 2012
In Defence of Abu Qatada’s Freedom
February 15, 2012
The Christmas #PMQs Tweeted & Translated
December 14, 2011