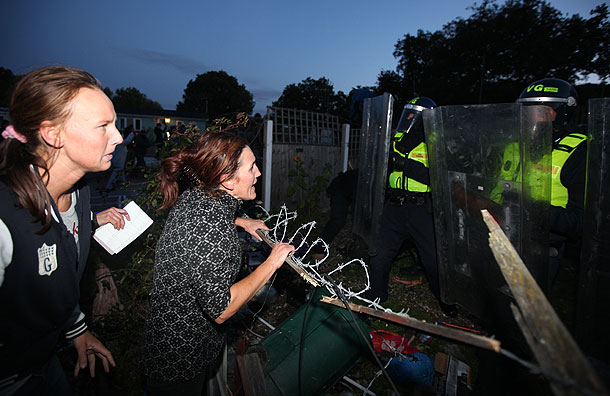 Over the past day, weeks and months, we have witnessed an unprecedented use of force and power towards one section of an ethnic minority community based in Essex. The local police constabulary and Basildon Council have admitted that the residents of Dale Farm pose no criminal threat nor are a source of other social antagonism other than simply wanting to live among the more “settled” elements. However the “peaceful eviction” was initiated by riot police bludgeoning faces with batons and firing tasers at protestors.

This was we are led to believe part of “facilitating” the enforcement of civil law. It is clear that the state is going beyond its normal throes of oppression. “Yeah it is really bad”, a friend tells me, “but is it really ‘ethnic cleansing’? Doesn’t that hyperboleÂ totally demean all those people that really are suffering from ethnic cleansing and genocide?”

The Definition of Ethnic Cleansing

When the term “ethnic cleansing” is used, it conjures up images of genocide and the Yugoslav Wars, and it does seem quite a stretch to compare a forceful eviction of 82 families with the crimes of Slobodan MiloÅ¡eviÄ‡. That is the widely held idea or “meme”, but let’s examine the actual definition according to the United Nations:

So according to this definition, rape or attempts towards genocide are not conditional for any tragic event to be labelled with this term. Though it often is, genocide should not be confused with ethnic cleansing. Without denigrating those who have and continue to suffer the effects of either ethnic cleansing AND genocide, let’s look into this further. The real conditions to test if an event is an example of ethnic cleansing are:

The first point is obviously true, reports from mainstream media, as well as eyewitness reports I’ve received through contacts that I have at Camp Constant, the Police have been brutal. At least two people have been hospitalised, some individuals have stated that there were being tortured by officers, in order to get locked on activists to unlock themselves. According to the Daily Telegraph:

“[Dale Farm Solidarity] resistance was futile in the face of the well-drilled force armed with Taser guns, batons and shields. The clashes left six people injured and resulted in 23 arrests. One person was taken to hospital with back injuries.”

This has been organised by the state via both central and local government. Though Essex Police claimed they did not want to partake in the eviction itself, they had reserved Â£10 million to fund riot police and other specialist units. The second point, the motivation of the state, is a serious charge that must be proven, if the charge is to be viewed as credible.

The Racial Motivation Case
Racial and ethnic discrimination though prevalent throughout society, is often very difficult to prove. Bigotry is a state of mind which can be only revealed through words and deeds.

However let’s imagine that Basildon Council was a responsible local authority which served the interests of all of its constituents and tax payers. If Basildon Council were genuine about fulfilling their duty as a responsible local authority, they would have put the welfare of the children and vulnerable adults within the site first and offered the residents suitable alternative accommodation.

“We have encouraged them to make homelessness applications over approximately the last six months. We have made over 50 offers of temporary accommodation, none of which have been accepted.

We have also made them aware of a number of authorised and unoccupied legal pitches around the country.”

This offer to the residents was not only inadequate and culturally inappropriate, it had the effect of breaking up the strongest asset that the Dale Farm residents had; their social solidarity which is fostered by living together as a tight-knit community. The residents rejected this option but continued to seek planning permission for the unauthorised half and were open to discussion on moving to nearby alternative sites.

Assuming Basildon Council had prioritised the interests of the residents that send their children to local schools, it would be reasonable to think that the Council would seek government funding to facilitate this option of alternative sites. What actually happened?

Under the last government, the Homes and Communities Agency offered a bursary to local authorities to finance legal pitches and sites for traveller communities. Councils across the UK have been shown to fail to take money available for Traveller and Gypsy communities. Basildon Council was among them but it was not out of ignorance. The Council admitted last year that it was not going to look for alternative sites but was brought into discussions with the Homes and Communities Agency (HCA) during 2009 and 2010.

For reasons unknown to us, they requested and set a pre-condition for their participation that the discussions must be conducted in secret with the â€˜Alternative Sites Working Group’. This group involved Essex County Council, the Government Office for the East of England amongst Traveller representatives. The travellers of Dale Farm found a suitable nearby HCA site, which the HCA stated: â€œ[w]e are willing to place any of our land in Basildon at the Councilâ€™s designation as a Gypsy and Traveller site(s). We are willing to identify and invest capital to establish the pitches on such land.â€ When this information was made public, Basildon Council withdrew from the group, destroying any possibility of alternative sites being mutually agreed.

Earlier this year, Basildon Council decided at a meeting where they excluded the press and the public from witnessing their deliberation, to reject the planning application for a nearby alternative site on the stated grounds of “road safety” despite admitting that the Highway Authority had not raised any objections.

So now if we imagined that those who led the Council were bigots, in order to carry out their prejudices, it would be necessary for a bigot to be able to justify their actions in a “politically correct” way despite their real motives. Language could be deployed as a tool to mask intention, the removal of over 100 children from their homes becomes not an eviction but a “site clearance”. The argument of “equal application of the law” is deployed putting the onus on the residents who have been and continue to be criminalised for wanting a place to live.

Rather than accept central government funding for alternative sites, the councillors in the cabinet have personally campaigned against any increase in pitches and spaces for Traveller communities, chose not to apply for additional funding made available by government agencies for traveller accommodation. Instead they voted to spend a third of their annual budget to finance this eviction and successfully appealed to the Coalition Government for an extra Â£10 million from the Home Office and Eric Pickles’ Department for Communities.

This video shows Tony Ball, Leader of Basildon Council, reaction to an offer of discussion on the presentation of a petition:

All of this, coupled with condemnation from Amnesty International and the United Nations, indicates clear discrimination. Basildon Council is blatantly going out of its way to avoid suitable alternatives, and a genuinely peaceful settlement. It seems that they are not interested in arriving at the best solution for their legitimate constituents.

But before the evidence is laid to rest, let us briefly look at the bailiffs that the Council has hired to carry out the eviction. The company known as Constants and co, uses “pikey, pikies” as search engine metadata – keywords used for finding them via search engines. They label themselves as “Traveller evictions specialists” as they have extensive experience in bulldozing caravans and demolishing items of sentimental value to Gypsy and Traveller communities. Would other ethnic groups’ considerations be treated in this way? Historically yes, Africans were once thought as three-fifths of human beings. Jews were often ethnically cleansed from many European countries throughout their history. Britain seems to be continuing a long tradition.

Does this all add up to ethnic cleansing? I have laid the evidence, but if is for you to decide. But if it does then the remaining questions are these: how could this happen in 21st Century Britain, and what will you do about it?


To call what is happening at Dale Farm “ethnic cleansing” is simply hyperbole, exaggeration and, frankly disgusting. If this truly were ethnic cleansing then why is only the illegal part of dale farm being evicted? The legally resident families bordering the evicted area are not being attacked, or evicted. A single plot of land hardly qualifies as a geographic region and it hardly qualifies as racially purifying an area when a couple of meters over the same ethnic/religious group is not being evicted? Are you seriously trying to suggest that they will be next?

Is there bigotry involved on the part of the local community and council? Maybe. Are the eviction bailiffs a shady bunch? Maybe. But that hardly amounts to ethnic cleansing. Apply the definition loosely enough and soon you’ll be calling it ethnic cleansing when the campers outside St. Paul’s Cathedral are eventually moved on. I’m sure they hold their beliefs strongly enough to qualify as a religion in someone’s view, and the steps outside the cathedral certainly qualify as much for a geographic region as a small plot of land.

But when you come down to it, the families that moved into the 2nd plot at dale farm knowingly and deliberately set out to break the law 10 years ago when they moved in.

They’ve been playing soppily on their figurative violins and tugging on the heart strings of anyone in need of a cause ever since.

And as the media reporting clearly also shows they fully prepared to defy the law until the last moment and by violent means. Pictures of “activists” armed with bricks and sticks greeting the first officers on the scene with a hail of missiles (a paraphrase of quotes easily discoverable in media reports). Since we’re redefining terms, let’s just call these “activists” terrorists; they certainly attempted to terrorise the police into leaving them alone, trying to bring about political change with a campaign of violence, and they clearly have no respect for the law themselves.

Perhaps there’s racism of another kind here on the part of the activists… why only support those law breakers of ethnic minorities… where are the activists when it’s the criminal majority that’s being evicted? I don’t see “activists” camping out or handcuffing themselves to the fabric of middle-class England’s doomed patio extension! Maybe because it won’t get them their 15 minutes of fame or maybe they just can’t build up enough righteous indignation if it doesn’t include an minority?

No one has come out of this covered in glory. It’s very ugly all round. The residents cynically and deliberately flaunting the law for a decade on one side (ably supported by bleeding-heart activists more interested in heroic last-stands than the hard work needed to actually bring about change; where were all these activists 10 years ago, why only turn up now?), a foolish council on the other and the police caught in the middle getting abuse, criticism (and actual missiles) thrown at them from all sides.

Am I happy about what’s happening? No not really.