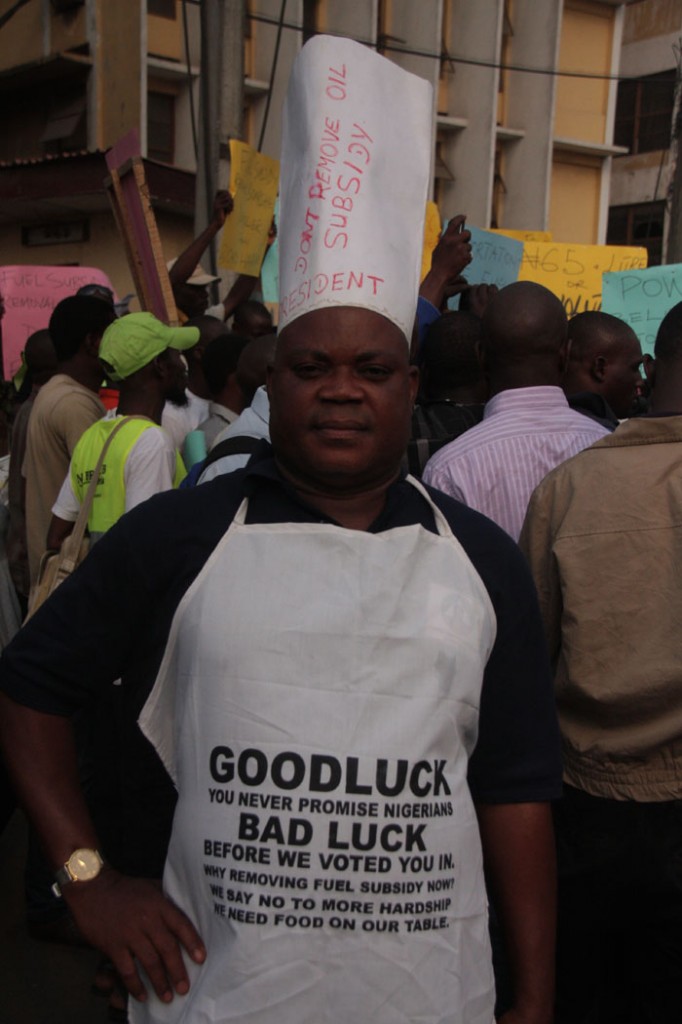 Nigeria, a country that had a tragic end of 2011, is starting with a hopeful start towards a better future. In December last year, a convergence of trade unions, civil society organisations and Action Aid, to launch Occupy Nigeria, a campaign to resist the withdrawal of the fuel subsidy that President Goodluck Jonathan introduced at the start of the year.

Today, Friday 6th January, Occupy Nigeria comes to London, assembly point at Charing Cross Station on 12:30pm and march to Nigeria House. Below are photos from marches in Abuja and Lagos that have taken place earlier this week plus the founding statement by Occupy Nigeria. A CLARION CALL TO ACTION

We are living through very hard, but equally interesting times ;through a period of another historic crises of the global capitalist(free market) economy; a crisis so deep that although it began as a global financial crisis ,it has now engulfed the entire global capitalist/ market economy and the political and socio-cultural systems supported by this economy.

Furthermore, as economic crisis have deepened, so have the political crisis, so much so that from one country to another, governing parties are losing their majorities and opposition parties are gaining majorities that are not enough to form government without going into coalitions. ElsewhereÂ  across the globe, and away from Europe,Asia, and the Americas ,in North Africa and the Middle East more dramatic political crisis is unfolding, precipitating historic mass uprising and revolution upheavals ,unprecedented in the life of a generation. In the life of a generation. In the MENAÂ  region, at the moment, three long standing regimes have been deposed (Tunisia,Egypt and Libya) two intense civil wars are ongoing (Syria and Yemen) and tension is rising and building up in the other countries forcing monarchs and ruling parties to propose different types of reforms to douse the popular anger (Jordan,Bahrain,Saudi Arabia,Morocco,Algeria).

A central characteristic of the responseÂ  of ruling classes and elites right across the world to the global crisis, has been to try to bailout (subsidies to the majority) increase in cost of services and imposition of new levies among others.

Nevertheless, as they have tried to increase the burden of hardships on the majority, so have the resistanceÂ  of the majority intensified. The result today is the revolutionary upheaval in the MENA, the waves of strikes across Europe and the Americas and the growing Occupy movement.

THE SITUATION IN NIGERIA:

Here at home in Nigeria ,the global economic crisis has been compounded by the monumental corruption of the ruling class ,its administrative and managerial ineptitude, and its political and governance. The Nigerian ruling class has been content to loot the treasury and to place its pecuniary interest far above the collective interest of the Nation and her people.

Nowhere is the more glaring than in the energy sector, with respect to electricity generation and distribution, and petroleum product refining and distribution. This ruling class prefers to continue to pretend to be helpless before a cabal/cartel of its own making, one that enjoys its patronage controls generator importation and fuel importation.

Because of its own selfish interest, the ruling class will spend billions of dollars on the importation of generator, basic food stuff and refined petroleum products; rather than invest in the power generation and distribution in the country, crude refining and distribution capacity within the country and in the value chains of basic food in country.

They undertake this unholy act with impunity because they are more interested in lining their pockets than in making the country work for her citizens.

Now they claim there is a subsidy on refined petroleum products because they have failed to revive refineries at home or build new ones after spending close to 100 billion naira on Turn Around Maintenance that have turned nothing around in the sector except the bank accounts of those responsible for this grand theft who are known yet still walk the streets of our country freely.

The result of decades of gross incompetence ,crass impunity with respect to corruption and grand ineptitude in overall management of the economy includes the wiping out of a vibrant textile industries; the loss of 1.8 million jobs in manufacturing alone between 2001 and 2010 as a result of the closure of 1,000Â  manufacturing concerns, as well as poverty level that has stagnated around 60%over the last ten years and a youth unemployment rate of more than 45%.

Given the parlous nature of the power/electricity sector, we know that virtually every sector of the economy is now directly dependent on fuel to run generator to generate power for industrial , commercial, agriculture, processing, transportation and domestic use. It therefore stands to reason that any increase in the pump price of fuel/petrol ,even a marginal increase not to talk of the proposed 130% increase will be quite devastating for the economy and crushing for the standard and condition of living of the [people cost of production and overheads will increase across the board. Transportation and logistics cost for moving goods and services as well as for moving human will also increase astronomically. The overall impact of all these will be higher costs for food basic services(education, healthcare),declining standard of living, increased absolute and relative poverty rising jobless and homelessness as well as increased crime and insecurity.

This is why it is imperative for this generation of Nigerian to resist these insensitive and anti people policy of fuel subsidy removal and the privatization (theft of public wealth by a few connected members of the political elites and their foreign backers) and deregulation (the falsehood that market regulates itself.

*Absolutely no increase in the prices of petroleum products and electricity Tariffs.

*Development and prompt implementation of a three year strategic and operational plan to acquire domestic refining capacity to meet domestic needs for petroleum products and also export; as well as to double current power generation and distribution capacity.

*Comprehensive investigation into the power and petroleum sector (Energy Sector) to identify and punish all those responsible for the failures/wastage/leakages/corruption in the sector that has led to the non performance of the tens of Billions of Naira pumped into the sector since 1999.

*A referendum on the appropriate economic direction for the country, including such issues as privatization, deregulation, provision of affordable basic services and infrastructures

Failure to meet these demands will lead to the following actions;

1 Beginning December 2011 â€“Preparatory direct mass action initiatives across the country wherever people are organized and ready to take tentative actions.

2 Beginning January 2012-A generalized, prolong and permanent street protest until demands are met in a signed agreement with the acknowledged representatives of the popular organization of the people.


Protest apron of the day award goes to this guy from #OccupyNigeria: http://t.co/aMUbhdun via @justinthelibsoc