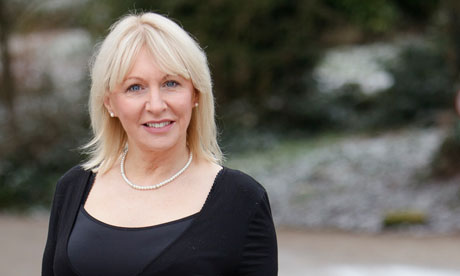 TAKE ACTION NOW! PleaseÂ write to your MPÂ and urge them to vote against the proposals. You can also come toÂ the protest happening on 20 January outside Parliament, which the BHA and other groups are supporting.

Tomorrow, Â 20 January, Nadine Dorries’ proposed Sex Education (Required Content) Bill, which seeks to secure abstinence education for girls only, is due to have itsÂ  â€˜second readingâ€™ in the House of Commons. In May 2011 MPs voted the Bill through its first stage by 67 to 61 votes.

A demonstration opposing the Bill is due to take place outside Parliament on the same day, supported by the British Humanist Association (BHA), Abortion Rights, Liberal Conspiracy, Education for Choice, the National Secular Society, Parents and Carers for Sex and Relationships Education (P4SRE), the Socialist Party, Youth Fight for Jobs, Feminist Fightback, Queers Against the Cuts, Slut Means Speak Up, Bristol Feminist Network and Left Front Art. Although it is unlikely that the Bill will proceed further than second reading, and perhaps may not get time to be debated, the demonstration and other actions have been arranged to draw attention to yet another attack by a political and often religiously motivated lobby on good quality SRE which could, if implemented, impact negatively on young peopleâ€™s health and education.

Good quality, comprehensive Sex and Relationships Education (SRE) should explicitly address the option of waiting before sex, sexual consent and safe sex, all of which are important. However, evidence shows that abstinence-only education, which promotes sexual abstinence until marriage, is ineffective in reducing teenage pregnancies and rates of sexually transmitted infections (STIs).

Another major objection with the Bill is that by just focussing on abstinence education for girls, it positions girls as being solely responsible for decisions about sexual activity and boys as having no responsibility for ensuring that sex is mutually consented to and safe. This sexist approach is detrimental to both young women and young men, and goes against the ways of learning recommended by the government, by sexual health experts, educationalists and others. Ms Dorries has also commented that the Billâ€™s teaching children to ‘just say no’ would reduce child abuse, a view which campaigners branded â€˜illogicalâ€™, not supported by evidence and leading to victim blaming.

â€˜SRE should be informative and fact based. As things stand, only the biological aspects of sex education and education about STIs are required to be taught by all maintained schools, with all other aspects such as relationships and consent being up to the school. If this Bill passes, then it is probable that many schools will only teach about abstinence before marriage in addition to basic sex education.â€™

â€˜There is no good evidence to support the substance of this Bill: abstinence education does not work. Not only is this Bill misguided, it focuses only on girls and negates and overlooks the important role of boys and young men in forming safe, fulfilling and consensual sexual relationships.

What this unfortunate Bill illustrates is the influence of a growing lobby with vested interests in promoting and imposing a narrow, unshared and potentially damaging perspective regarding sex, sexual health and abortion rights.

All children and young people have a right to high quality, comprehensive and objective SRE in all schools, including â€˜faithâ€™ schools, which would and should equip young people â€“ both boys and girls â€“ with the information and skills to say no to sexual activity if that is what they choose.â€™