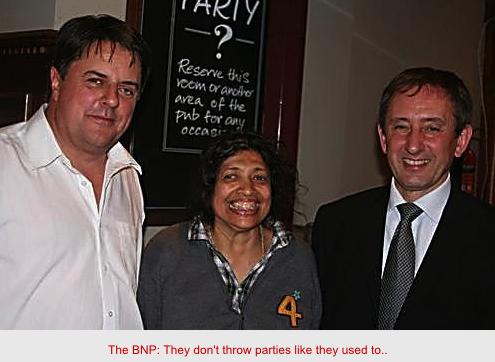 When I got there, they were two men distributing BNP leaflets, one about 6 foot, balding, bespectacled and appeared to be in his late 30s, the other joker was in his late 40s, dark but greying hair also wearing glasses and around 5 foot 5. It was the latter who had the gall to hand me a leaflet, so I asked:

Why do you think you have the right to hand out this shit?

He retorted that I didn’t own these streets and tried to engage in conversation about how “reasonable” the BNP were. I pointed out some basic facts of Nick Griffin being in the National Front and recently photographed in Liverpool with a White Power flag, I demanded he should leave. The other guy then accused me of denying their democratic right to freedom of speech.

The smaller guy warned me that if I continued he would call the police, to which I laughed and then started shouting to commuters that the BNP is a racist party and not to take their filth. Other commuters started to join in with me and very few commuters took any of their GLA propaganda. The smaller guy still tried to argue that the BNP were no longer racist. I asked the taller one if he thought Nick Griffin was a racist, his reply was

I started loudly telling the good commuters of Surbiton that this member can’t even deny that Nick Griffin is a racist. So I then asked him if the BNP was a racist party, his reply was the same. After about 10 minutes of fruitless leafleting and more irate commuters surrounding them including this legend. They packed up and left, with the full knowledge that fascist scum were not welcome.

What made me laugh however was how desperate and ideologically confused their literature was- I kid you not:

The Greater London area is a diverse community made up of many different cultural and ethnic groups.

Although there are some benefits, we should always remember the dangers that come with this clash of cultures, which is why our traditional British identity MUST be represented on the GLA by the British National Party…

Moral of the story: When and where the BNP or racists show up, anti-fascists must be ready to directly confront them.


i witnessed the whole thing and i thought the UAF were trying to deny us the right to make up our own minds.
the leafleters were just ordinary looking citizens and the only fascist as i could see were the big mouthed leftie types.

i have had enough of being told lies by the media, government and unions.
and i am not alone i will be taking a closer look at the bnp policies after that nasty display of political/voter intimidation.


I make no apology for being a “big mouthed leftie type” who confronts fascists in the street. If you the BNP more than unions then more fool you.


what should i do justin who should i give my vote to then? i have looked at the website of bnp and I’m enclined to think that the are getting their act together and look like just a political party offering choice to me.
i see ordinary working people,i don’t see nazi’s or fascists.
are you sure your not overreacting to something that no longer exists?


“They are getting their act together?” What?

So the reason you didn’t vote BNP before because they were less organised? As opposed to being fundamentally racist and led by a fascist bigot? Have you read my article? Two weeks ago Nick Griffin was proudly posing next to a White Supremacist flag. http://www.anti-fascists-online.com/2012/02/liverpool-losers.html

So they are still led by a fascist bigot, the British National Party are less organised, less well-funded now but they haven’t changed their leadership or core strategy of being a party that seeks to smash unions, stop Asian and African immigrants from entering Europe, but wanting to humiliate those that are already here by pushing mandatory tests.

They want to portray all Muslims as Al Qaeda and adopt jingoistic language about “traditional British values”.

I’m not in the business of telling people who to vote for, but if you are tempted by the British National Party, I’d recommend you don’t vote at all.


well I’m of the mind that all parties can change after all its the policies that count.
i have seen nothing in their manifesto of policies online to support these claims of yours.
diversity is good and so is political diversity all the rest are the same to me dragging us into conflicts,bailing out bankers etc.
i think that your own left leaning views would want me to keep voting for failing main parties or not vote at all.
i know realise that its not that they are fascist rascist bigots its about voting for your ideology.
having seen you perform your democratic rights and communicated with you i am enlightened but not buying into these scare tactics
so trust the people don’t do your cause more harm than good by your actions.
thank you.


get real robert how? should i keep voting for the same 3 failed parties
i have already lost my job and I’m gonna lose my home next.
so come on robert tell me whats the plan?


Well Seymore,pleased to see you want to discuss options,but first let me say that i view anyone who supports, has sympathy for the BNP as cunt and a traitor of the working class.You may cal me what you like ive been attacked by ou bunch many times
Read a little of anarchism. i may sound patronising but i dont aplogise for that i sympathise with your plight but dont go for scpegoating politics,


im a floating voter robert, and i look at political parties as promoting an selling products i.e. their policies.

i have been buying the products of the big three parties for years and heard all the excuses as to why they don’t work properly.

so now I’m inclined to buy products of the bnp and if they don’t work i will go somewhere else.

now do you respect my freedom of choice because its not idealogical
for me?
please don’t call me a cunt you wouldn’t keep buying meat from a butcher that was putrid would you?


seymore, where and when are you leafletting again, love to meet you


I saw the whole incident at Surbiton. The liberal lefties came across as thugs and the BNP men seemed calm and relaxed and non-aggressive. I must say the lefties seemed to be living with “the ghosts of the past”. They were talking about the slave trade and British rule in India and how British people should feel guilty. I did take a leaflet and read it and I think I will voting for the BNP in May.


I am not a liberal. Libertarian yes, liberal no.


Seymore, you wrote that ‘I have seen nothing in their manifesto of policies online to support these claims of yours’.
The leaflet they were distributing shows a man claiming that he supports the BNP ‘Because they will stop the Islamisation of Britain’. Personally I find this idea completely unfounded and frankly intolerant of other cultures.


Ruth thats a valid point you make, the way i see it is that its the lib/lab/con parties that have the blood of 1/2million muslim men ,women and children on their hands not the bnp in fact they have never harmed any muslim’s. its a contrary policy so if you don’t like it, you don’t for them no?
also the leaflet is pretty mainstream i was expecting something hard hitting and negative i was surpised at its quality unlike the leaflets i have been getting from the 3 failing parties who basically now take it for granted that they should get voted in.

I’m very concerned about my own culture and identity and as indigenous british, think it needs protecting.

am i wrong after all isn’t that what diversity is about?


Take your point seymore regarding the butcher.


indigenous british WTF
next you will say you respect the Royal family (with their german/greek heritage)
British culture is alive and well seymore, there is no risk to it from johny foriegner or dark peoples


robert its my concern and i don’t need you to ridicule me because its how i feel.
dont knock my heritage i happen to believe in indigenous peoples rights to their land.
and i am a royalist and their european linage is not an issue for me.


“dont knock my heritage i happen to believe in indigenous peoples rights to their land.” Just wondered what your thoughts were on the British empire in this respect? And other non-white indigenous groups?


Seymore
i ant no bright person but really I could not be a royoalist as those bastards took land from my ancestors ruled with cruelty etc etc. No wonder you have BNP symptathies, you just seem to want to be controlled Dave’s pont re the empire makes your point seem totally ridiculous.
i guess you aint working class.


i come from working stock so I’m a working man i think our outlook is different and thats alright by me, I’m gonna give the bnp a chance and if they get a fair crack and my vote is respected by the other political
minds i will believe in the system again. if they don’t deliver i will just vote some other party.
but what will not be impressed with is if they are not given a fair chance.
thats not democracey.


Seymore
youve lost your job and might lose you home.If you suppport those thieving royals you might just deserve it. Tehy dont give fuck about you, so why not ..i


Seymore : I finally agree with you.
Also if all gose bad this year we can all rejoice at the queesn jubilee. She si suc ha great laady