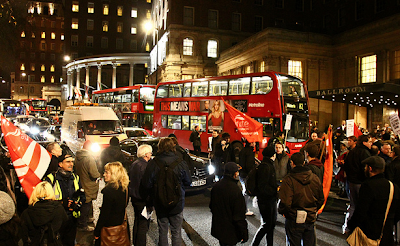 This evening the rank and file Sparks group of electricians isÂ claiming victory over the construction companiesÂ who sought to tear up their current contracts, and enforce a new settlement which would have cost many 35% of their wage packet, and severely deskilled the trade.

Right now, theÂ Sparks Facebook pageÂ is filling up with joyful, celebratory comments such as:

“Grieg do you remember way back at the start of all this we were saying to each other WE R FUCKED. Unless everyone gets together the industry is fucked. Well now they r fucked they have gave us a platform to launch an attack like they have never seen. Thanks”

I have been reporting on the Sparks’ struggle since last September (seeÂ here,Â here,Â here,Â here,Â hereÂ andÂ here). In my last update, I was very pessimistic about their chances of success, but the last week has seen construction company after construction company back away from the ‘sign or be sacked’ Building Engineering Services National Agreement. Balfour Beatty – the largest of the “septic seven” – was theÂ first to reconsider. This came in the wake of aÂ court decision allowing Unite’s official one day strike ballot to stand, but also – and likely far more importantly – after electricians took Balfour Beatty executives and police by surprise at a swanky Park Lane dinner, andÂ literally chased the fat cats around the building.

Much is still unclear, and I will produce a full account of this stunning transformation over the coming days, but workers in all sectors should be inspired by this success, and know that that ‘direct action gets the goods’ is far from just being some anarchist saying. The best elements of the Sparks’ campaign must now be replicated across the country, and even throughout the world.