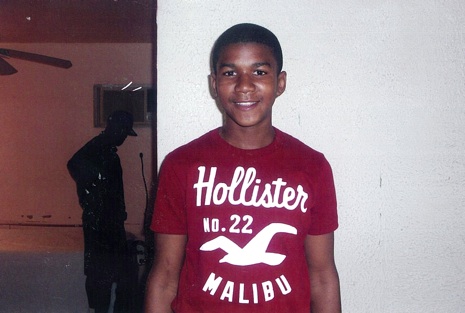 A month after the shooting of unarmed black teenager Trayvon Martin in the town of Sanford, Florida, his killer, George Zimmerman, is still a free man. Zimmerman has told local police he was attacked from behind and acted in self-defence but there is overwhelming evidence, both from witness accounts and recordings of 911 calls, that Zimmerman murdered the teenager in cold blood. The fact that local police have decided not to arrest Zimmerman has sparked a national outcry, and the FBI has now started an investigation.

We feature Democracy Now’s excellent coverage of the issue, which includes an analysis of the role of Florida’s controversial ‘Stand Your Ground’ law, which has also been dubbed the ‘Shoot First, Ask Questions Later’ law. The law, introduced in 2005, includes a defence of justifuable homicide, in cases “when the actor reasonably fears imminent peril of death or serious bodily harm to himself or another”.


In a simple statement issued on the 23rd March 2012, DOREEN LAWRENCE the mother of murdered British teenager Stephen Lawrence ( see here : http://www.bbc.co.uk/news/uk-16347953) expressed words of support and encouragement to the parents of Trayvon Martin.
‘YOU ARE IN OUR PRAYERS-‘
Doreen Lawrence stated ‘ I wish to pass on my condolence to the family of Trayvon Martin for the untimely death of their son. I too had my son Stephen Lawrence taken away from us in an unprovoked racist attack in April 1993. It took over 18 years of campaigning to get justice. The police and the justice system proved to racist in their behaviour towards my family because my son was black and his perpetrators (5) were white men. I will keep your family in my prayers and hope you get justice for your son Trayvon.
Yours sincerely,
Doreen Lawrence (mother of Stephen Lawrence)
Doreen Lawrence – Founder/External Director
The Stephen Lawrence Charitable Trust
39 Brookmill Road, Deptford SE8 4HU England.
http://www.facebook.com/stephenlawrencecharitabletrust