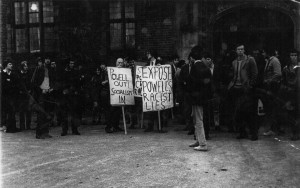 The guild of students have just circulated a set of photos for â€œalumniâ€ celebrating guild of studentâ€™s campaigns over the years. This is part of an alumni strategy to build up a alumni network which will generate revenue for the guild. In the selection they choose to celebrate items as radical as â€œâ€No debate with the thugs in blue, Spartacistâ€ & â€œGeneral strike now Spartacist Leagueâ€. Yet this is from the student union who in response to the ban on protests condemned by amnesty international said it â€œdoes not limit their freedom of speech in any wayâ€, despite stanch criticism this statement was never withdrawn.

They are happy to market our past to nostalgic ex-students but not work and live by the same values today. Many of the campaigns celebrated in the alumni album are of great significance and value. Such as the old of photos of reclaim the night marches and the famous picket which drove Enoch Powelâ€™s racist drivel off campus.

The guild doesnâ€™t stand up for the right to protest anymore, it doesnâ€™t support liberation groups either. It is belittling to reduce the history of student radicalism and liberation movements to a nostalgic kitsch to be marketed to old members as part of an alumni fundraising strategy.These protests and campaigns should be celebrated but not just as a kitsch nostalgic alumni drive but, as a living part of the union today.

Beyond “A Plague on Both Their Houses”: The Bradford 12 & the Liberal Anti-Fascism of Hope Not Hate
May 1, 2013

Riot from Wrong: the documentary about the riots everyone should see
August 10, 2012