A tale of two Olympic cities: the need for green and decent jobs in London and Rio 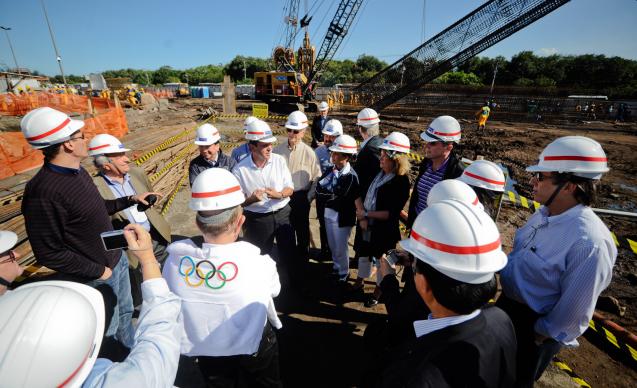 All eyes are on Rio, Brazil, as the UN Rio+20 Earth Summit gets underway later this week. World leaders will come together from the 19th â€“ 22nd, twenty years on from the original Earth Summit, to reaffirm the principles of sustainable development, and agree to solutions and strategies that can tackle global challenges such as food production, access to water, biodiversity, climate change, fisheries, employment, transport, and gender.

However, as the preliminary negotiations wrap up this evening, the outcome of the summit is not looking all that promising. National governments are finding it hard to come to consensus on any of the issues, with text being deleted and replaced faster than you can blink. As the UN framework for negotiations looks more redundant than ever, it looks like a new era is dawning, where cities and communities must take the lead.

There is no greater opportunity to do that, than as an Olympics host. Indeed, London claims that 2012 will see â€˜the most sustainable gamesâ€™ ever and Rio, as 2016 host, is following suit. But with all the trumpeting, are the games really a catalyst for sustainable practice and local, green economies?

So… thereâ€™s that. There is also the issue of green and decent jobs. London 2012 promised to provide 12,000 jobs for local people, most of them working in sustainable construction. Certainly, it has created many jobs, especially in the East London borough of Newham, where construction programmes have been springing up like crazy over the past couple of years.

However, investigating who those jobs have gone to is another story. The Chair of the London 2012 Organising Committee, Seb Coe said: â€œWe have been committed to recruiting 15-20 per cent of our workforce from the six Host Boroughs and I am proud that we are already beating this target.â€ But local MP, Rushunara Ali, has pointed out that many of the workers on the Olympics sites are being counted as local residents, simply because they have rented accommodation during their contract. Of more concern is the fact that most of the jobs created from the games will be at the on-site MacDonalds and in Westfields shopping centre. Hardly sustainable employment.

The reality is that most of the work created has no long-term prospects. It is temporary, shift work that will abruptly come to an end in September. One job centre in East London told me that they are having to make special preparations for the end of the games, when they expect thousands and thousands of people from the local area to sign on again at the same time.

So, what lessons can Rio learn from East London, and how can they go about creating sustainable, decent employment for the local area?

They have already come up against their challenges. Ramon Smezeta from the Play Fair Campaign, speaking at the Trade Union Assembly on Labor and the Environment last week, described how local street vendors would lose out from the games. The Olympic Committee has made deals with big brands such as Coca Cola and MacDonalds, preventing vendors from selling competing products in the vicinity. He also highlighted that foreign workers who have come to work on the construction sites are already contributing to a boom in sexual tourism. The Olympics should pride themselves in bringing decent work opportunities to their host country but itâ€™s not clear yet which way it will go for Rio.

One thingâ€™s for certain, the Brazilians sure know how to make demands. At stadium sites, construction workers, eager to share in the surging wealth around them and newly empowered by the nationâ€™s historically low unemployment rate, are pushing aggressively for wage increases. Unions have already held strikes in at least eight cities where stadiums for the 2014 World Cup are being built or refurbished, including a stoppage in February by 500 workers in the northeast city of Fortaleza, and a national movement of 25,000 workers at have also threatened to go on strike.

Governments may not have cottoned on yet, but the demand for strong action on sustainable development, and for green and decent work, is there. And where there is demand, supply must follow. If it doesnâ€™t, weâ€™ll have a fight on our hands.