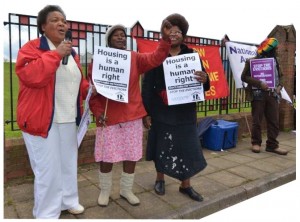 On Saturday, a solidarity demo with refugees facing eviction, destitution and deportation was held in Glasgow.

The last twelve years have seen a massive shift in Glasgow’s demographic since the first asylum seekers were transported up here, shoved onto buses not knowing where they were going and dumped in condemned tower blocks.  3,500 refugees appeared in Glasgow overnight with little support, away from their friends, families and communities.  Such a massive influx of new-comers with little explanation or support given to the local community saw hostility and resentment against asylum seekers rise, culminating in a murder of a young Kurdish man, Firstat Dag in 2001.  A murder which shocked and horrified the indigenous and the incoming community alike.

Since that terrible event, the refugee community in Glasgow has become a valued and important part of our city, enriching our communities with new foods, new culture, new languages and new ideas.  In the mid 2000s, Glasgow saw dawn raids on families living in our communities, where the UK Border Agency kicking in doors, using metal battering rams to seize men, women, children, toddlers and babies from their beds, shoving them into darkened vans and taking them to be locked up in Dungavel.

The horror of what was being done to our new citizens saw a rise in asylum seeker support.  Lively and active campaigns to end these barbaric dawn raids were taken up by politicians, journalists, political activists and teenagers.  The Glasgow Girls a group of teenage activists in Drumchapel who saw their school friend disappear with no warning and no explanation and feared that they would be the next to be “disappeared”, established a lively and vibrant campaign to protect children from being imprisoned, while adult asylum seekers established UNITY to provide practical, legal and emotional support to asylum seekers, tracking them when signing at the Home Office (to make sure that they come out again after several were detained and imprisoned after attending for their weekly sign-in), alerting friends, families, neighbours and supporters when someone has been detained, running a night-shelter and soup kitchen for destitute asylum seekers, providing clothing, bedding and toys to those in need and campaigning for the rights of refugees to stay in Glasgow, and the right of Glasgow to welcome refugees.

For a while, it seemed like our efforts were paying off. The frequency of dawn raids declined, Y-people, the charity with the contract to house asylum seekers agreed to continue to house refugees through periods where their funding was cut, as they negotiated the legal maze they were caught up in and in 2010 the Scottish Government announced that it would end the policy of imprisioning children in Dungaval.  The latter proved to be a pyrrhic victory, as babies were snatched from their homes, shoved into vans and driven for nine hours to Yarls Wood detention centre in England.

Earlier this year, Y-People a supposedly Christian charity, announced that they would no longer house asylum seekers who had been refused Section 4 funding.  Far be it from me, a heathen, to lecture Christians on their religion, but it is worth drawing attention to Matthew 25:35-40.

For I was hungry and you gave me food, I was thirsty and you gave me drink, I was a stranger and you welcomed me,  I was naked and you clothed me, I was sick and you visited me, I was in prison and you came to me.â€™ Then the righteous will answer him, saying, â€˜Lord, when did we see you hungry and feed you, or thirsty and give you drink? And when did we see you a stranger and welcome you, or naked and clothe you?  And when did we see you sick or in prison and visit you?â€™  And the King will answer them,â€˜Truly, I say to you, as you did it to one of the least of these my brothers, you did it to me.â€™

How can they call themselves Christians, while so blatantly disregarding the guidance of their Bible in how strangers should be treated?

Y-people have justified this by the loss of their contract to house asylum seekers in March, which sees the transfer of the responsibility for housing Glasgow asylum seekers given to SERCO. SERCO, a multinational corporation which boasts among its portfolio contracts for running detention centres and prisons (along with military provision and nuclear weapons handling) joins G4S and Reliance Security Task Management in housing some of the UK’s most vulnerable citizens.  All three of these companies boast “security” as a major part of their corporate services.  It does not take a genius to work out that the award of this contract is less about providing needy people with homes, than with ensuring that “undesirables” are kept in pre-detention housing ran by companies with experience and capacity to effect imprisonment.

And this is the context that yesterday’s demo was called in: dawn raids and detentions again increasing; some new Scots being snatched by the UK Border Agency and taken to England while others, many with young children, emotional and physical health issues and recovering from the traumatic experiences that led them to flee their homelands in the first place are papped out onto the streets while anxiously awaiting the transfer of the housing contract to a company which specialises in imprisonment.

The demo itself was excellent.  Despite many asylum seekers being too frightened to turn up, in case UK Border Agency officials attended the demo and tried to seize them, around 400 asylum seekers and their supporters marched through Glasgow demanding an end to the raids, detentions and deportations.  We had also gained information that the North West Infidels, an bunch of knuckle dragging English racists had threatened the demo.  While the speeches following the demo continued, Strathclyde police moved in, instructing people to move off the Square and threatening to use the Public Order Act to move people if they refused to leave. With vulnerable asylum seekers and a number of children in the area, there was little choice but to comply, and people moved on, concluding the rally early. An elderly man, who didnt move fast enough for the police’s liking got arrested for breach of the peace as he stood in the middle of Glasgow’s main public square.  And why were they so keen to clear the square?  So that it could be given over to racists and fascists.

Within minutes of moving off refugees and their supporters from the square, police marched in a group of 25-30 white men, holding up banners which in an of themselves constituted incitement to racial hatred to shout their racist hate. A few police dotted around the group, while the majority of police encircled the square, insisting that people must not enter. A young Asian woman who attempted to enter the square was shouted at and manhandled by police who threatened her with arrest, moving off a group of Asian youth, not just off the square, not just off the pavement surrounding the square but down into side roads well away from the centre of Glasgow, while the supporters of refugees were held in a tight kettle in a corner on the edge of the square.

After 15-20 minutes, the racists then left the square, accompanied by the police who then left them free to roam the streets of Glasgow in the full knowledge that only 30 minutes before there had been a gathering of asylum seekers in the very same area, while keeping anti-fascists and refugee supporters kettled at the other end.  When the kettle was finally ended, the police then stopped people moving off towards the main shopping area, continually telling them that they were free to leave, while instructing them repeatedly that they could not go that way, nor that way, nor that way either, threatening arrest under Section 17 of the Police Act (Scotland), if people did not comply with their directions.  It was at this point that a second activist got arrested when he asserted his right to walk along a main street in Glasgow.

Meanwhile, the racists had regrouped in Buchanan Street between the Palestine Human Rights Campaign Stall, which they had previously attacked in November last year, and the Communist Party stall which they had attacked in January. Knowing that the Palestine stall had been a prior target, a small number of anti-fascists who had managed to avoid the kettle had made their way there to protect it, as others finally managing to escape from the repressive policing also made their way down.

A lone policeman on a bike had been stationed there, despite the prior violent attacks from the group that had just been let loose to roam the streets causing mayhem.  As tensions became heated between the racists and the anti-fascists, the police appeared en masse and re-kettled the racists in a side street, eventually parading them down Buchanan Street. Allowing them to spew their bile all the way down one of Glasgow’s main shopping streets, all the while telling people that countering them was “making their job harder” and “was not helpful”. Two more refugee supporters were arrested just after the racists were moved off, under a Breach of the Peace charge, for shouting at the scum.

Serious questions must be asked in the light of the events of yesterday. Political policing in Glasgow is totally out of control. We are seeing continual arrests under broad ranging legislation for nothing more serious than shouting, refusing to move from a public square when ordered to do so, and attempting to walk down a public street. On a number of occasions people were told that they were being moved on, or prevented from walking where they wished “for their own safety”.  If the streets and public squares of Glasgow are unsafe for people to enter, then it is the job of the police to make those streets safe, not to prevent people entering them on threat of arrest.

Political activists in Glasgow are seeing increasing harassment at the hands of Strathclyde police.  Arrests made on dubious grounds; police turning up at people’s doors to instruct them where they may and may not go; stop and searches being conducted as a means of intimidation and harassment of peaceful protesters.  The Glasgow Defence Campaign has been logging just some of these incidents.

We have a live situation in Glasgow with over 150 asylum seekers about to be made homeless, while others are being dragged down to England, imprisoned and shoved on planes.  It is outrageous that the UK state can snatch our new citizens and take them to another country.  We need Scottish independence so that no longer can new Scots be snatched in this manner.   We need a compassionate and understanding system of asylum so that new Scots do not have to live in fear of facing further trauma at the hands of the UK state compounding the torture from which they have fled.  We need policing which protects our citizens, rather than protecting those who seek to abuse and harass.

Refugees should always be welcome in Scotland – ove centuries Scotland played a horrible part in the British Empire which has in no small measure contributed to the reasons why many people flee.  We need to end our involvement in the British State.  Only when we have control over our borders can we ensure that they are open to those who seek safety from persecution and injustice, yet closed to those who come to drag them from their homes to subject them to more.


In case you missed it: Political policing in Glasgow – racists roam free but anti-fascists arrested for shouting back http://t.co/kDa96a3r


In case you missed it: Political policing in Glasgow – racists roam free but anti-fascists arrested for shouting back http://t.co/kDa96a3r