Lies, Violence and Policing: From Hillsborough to PC Simon Harwood – How much has changed?

Simon Harwood, who the Daily Mail called “the thug in police uniform“, is no longer a Police officer. For the second time, his career for the Metropolitan Police has ended, and his pension remains intact. The public disciplinary of Harwood was a vain attempt to inject confidence into the Met, as Tomlinson’s relatives toÂ declared the disciplinary hearing a whitewash. So soon after “the whinging scousersÂ were proved right” about Hillsborough, trust in the British Police can only have fallen further from its alreadyÂ European all time low.Â The popular image of the policeÂ hasÂ metamorphosed from the rugged righteousness of DCI Gene HuntÂ into the rictus grin of PC Simon Harwood.

You know when senior police officers are worried about public confidence in the police when at the end of last year they publishÂ a paper on how to maintain legitimacy in an era of budget cuts. It will take more than policy papers and apologies from the heads of government, police and the media to regain fledgling trust after the revelations of Hillsborough.

The current South Yorkshire Police Chief Constable David Crompton admitted that in the 1980s, there were “far fewer checks and balances and far less scrutiny of what the police were doing… “, but he intimated that the police have higher standards of “openness and transparency”. So how have things changed?

1989:Â A coroner originally said all the victims were dead or brain dead by 3:15pm on April 15, 1989 and recorded a verdict of accidental death. This was always treated with suspicion by the families as video footage showed that people were being helped at 3:36pm. We now know that the original coroner is false and at least 41 people were alive after 3:15pm.

2011:Â Jacob Michael was aÂ young man who had died afterÂ being held down and beaten by 11 police officers, even thoughÂ he had called the policeÂ for help.Â A Home Office pathologist found that his death was due to “excited delirum”, a conditionÂ not recognised even by the UK’s own Department of Health.

2012:Â Dr “Freddy” Patel wasÂ found guilty by a medical tribunal of misconduct of Â deficient professional performance and dishonestyÂ when he had attributed Ian Tomlinson’s death to coronary heart disease and thus “natural causes”. After the emergence of video footage showing Ian Tomlinson had potentially fatal contact with City of London Police, the Tomlinson family ordered a second postmortem which showed that Ian Tomlinson died of internal bleeding. Despite Dr Patel, being previously suspended and complained about by the Home Office and the Metropolitan Police regarding similar oversights in previous cases, his convenient postmortem generated enough doubt to help PC Simon HarwoodÂ get acquittedÂ of manslaughter.

2005:Â Jean Charles De MenezesÂ was shot by police in Stockwell Tube Station due to being mistakenly suspected of being a suicide bomber. Scotland Yard put a press statement both on the day and 24 hours after the shooting out that theÂ suspect’s “clothing and behaviour at the station added to their suspicions”. Information was put out by senior officers that de MenezesÂ vaulted over ticket barriers, he had refused to obey instructions of police officers. According to theÂ Stockwell 2 report by the IPCCÂ – “Whilst the MPSÂ admitted to having made a tragic mistake they continued to try to justify theÂ shooting by referring to Mr de Menezesâ€™ own actions and clothing.” Others would suggest this wasn’t a mistake butÂ deliberate misdirectionÂ by Assistant Commissioner Andy Hayman and Metropolitan Police Commissioner Ian Blair.

Â Character Assassination of the victims in National Media 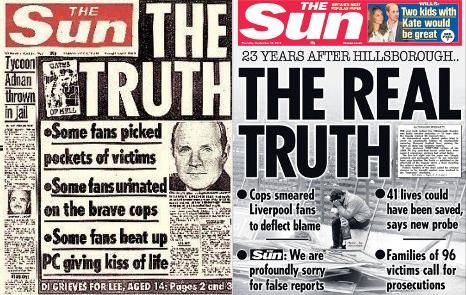 1989:Â The Sun published their infamous front page – The Truth, which claimed:

“Sheffield MP Irvine Patnick revealed that in one shameful episode a gang of Liverpool fans noticed that the blouse of a girl trampled to death had risen above her breasts. “As a policeman struggled in vain to revive her, the mob jeered: ‘Throw her up here and we will **** her'” -Â The Sun Newspaper on Hillsborough

“After smashing their way into the Kalam brothers’ East London home at 4.10am on Friday two armed police officers rushed up the stairs to seize the two men. Security sources say the cops were confronted by the Muslim brothers, who were trying to run down the steps, and a scuffle broke out. This is understood to have climaxed with 20-year-old Abdul Koyair making a grab for a police firearm, which already had its safety catch off. In the desperate struggle that followed, the gun was fired and the bullet hit 23-year-old mail worker Abdul Kahar in the shoulder.” – News of the World on the botched Forest Gate raid

These stories of course despite coming from “reputable sources” were later proven to be complete fabrications.

1989: The scale of Hillsborough cover-up was unprecedented in British history:

2001: 15Â South Yorkshire PoliceÂ officers who were working on that day, have since 1990s received substantial out-of-court payouts totalling over Â£1.5 million, includingÂ one officer who received Â£330,000 for “post-traumatic stress”. The payout ensured that his testimony wasn’t heard in court.

2006: Three police officers were acquitted by a jury of killing the 26-year-old after Robin GoodenoughÂ was stopped in 2003 in Oxford. He was punched in the face, his face was smashed on the road which left him with two broken teeth and a broken jaw. He swallowed so much blood that he could not breathe and died of a heart attack.

2012: Alfie Meadows suffered brain injury after a police baton cracked his skull during the student protests of 2011. He was charged with violent disorder and awaits a retrial whilst his attacker has yet to be investigated of their conduct.

The problem doesn’t lie with a few bad apples, it is systemic across the forces in England and Wales. David Crompton promise of a culture of “transparency and openness” still awaits the families of Smiley Culture (David Emmanuel) with Surrey Police, Kingsley Burrell and Demetre Fraser – West Midlands Police, Sean Rigg – Metropolitan Police (Brixton), Â Christopher AlderÂ – Humberside Police, and many more cases where the coroner report has been of questionable veracity or not still yet undisclosed.

Thanks to the independent charity, Inquest, we know in England and Wales,Â since 1990 over 1000 people have died either whilst in custody or by being shot by the police. Since 1967 of no English or Welsh officer has been prosecuted for a death in their custody. When officers are suspected of wrongdoing, their word is taken as fact, contrary evidence is consistently ignored and in the few occasions when it is overturned, it is only done so with unsought video evidence. Most continue with their careers unheeded, those few suspected officers who do eventually exit the force, do so with their financial benefits protected or even enhanced. Also with the sole exception of Harwood, their reputation intact.

The apologies of the historic ills of Hillsborough ring hollow, as today in 2012 when the police patrol the streets, they can fearlessly go out and make a killing.


Blog post: Lies, Violence and Policing: From Hillsborough to PC Simon Harwood – How much has changed? http://t.co/BegNjeMw


Lies, Violence and Policing: From Hillsborough to PC Simon Harwood – How much has changed? http://t.co/xUL2qEzV @copwatcher @JodyMcIntyre