From Red Gold to Blood Strawberries: A Story of Immigrants in Europe

On Wednesday 17th April, in Nea Manolada, Greece, more than 30 Bangladeshi migrant strawberry pickers were shot by their supervisors and bosses and several workers are currently in critical condition. The shooting took place when around 200 migrant workers demanded to receive wages for 6 months unpaid work. TheÂ Associated Press news agency reported thatÂ Police Captain Haralambos Sfetsos claimed the workers had “moved threateningly” towards the foremen when they opened fire.Â According to the BBC, the local police have arrested two suspects: a foreman and the owner of the farm, and now a third person aged 21 has also been arrested. Members of the Greek Communist Party (KKE) staged a march in the town of Manolada on Thursday.

Nea ManoladaÂ is a small village in the Ilia or Elis region of Greece, a region situated on the PeloponneseÂ peninsula that became home toÂ Greek refugees fleeing persecution and ethnic cleansing in Asia Minor after the Greco-Turkish war in 1922. The agricultural village has a local population of around 3500 people including approximately 1500 foreign-born migrants. While most of rural Greece has been crippled by the economic depression, this town and the wider region has been going through an export boom. Nea Manolada is responsible for 90% of Greece’s national production of strawberries which isÂ predominantlyÂ sold in Switzerland, Germany and Russia. The incomes for local farmers have known to have grown by 30% in a single year. This acute economic boom in the midst of a stagnant rural economy has inspired producers from other regions to hold conferences and discuss how they too can replicate the prosperity brought by the strawberries termed as “Red Gold”. However there is little mystery to the magic of Nea Manolada, as behind the “miracle” of Red Gold are the hands and sweat of exploited migrant labour.

Migrants who have come not only from Bangladesh, but since 1980s also from Pakistan, Egypt, Bulgaria, Romania, Albania and other Balkan countries. Initially they came during the summer periods but as cultivation and profits developed, so did a form of housing with varying permanence. As shown by this Greek news website, the word “housing” perhaps is too much of a euphemism for the large tents that have largely no electricity or running water, and are reminiscent of the shanty towns and shacks of South Africa’s Western Cape. These makeshift slums are on the outskirts of the village and are demarcated byÂ barbed wire and spotlights. It is in these miserable conditions in which hundreds of migrants sleep, eat and wash in. The strawberry pickers are mostly undocumented, which allows a number of local Greeks to profit from their vulnerability. For example, the local “mafia” who charge the workers “protection” payments to maintain their existence. The daily life of these workers are illustrated inÂ this excellent reportÂ (now translated into English) by Dina Dascalopoulos,Â a Greek journalist. It documents how one worker called Jamal, has his daily pay of 22 Euros (Â£19) reduced by rent, compulsory shopping for food and hygiene products at the employer owned mini-markets, payments towards a debt owed to traffickers and several other charges leaving his actual take-home pay to 5 Euros (Â£4.20). It was from this sum that savings were made to be sent back to his family members across continents. 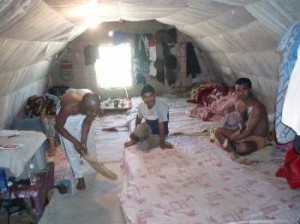 One of the Manolada tent homes

The latest shootings are not a surprise to the Greek anti-racist movement, as the history of brutal exploitation and repression of migrants in Nea Manolada is well known locally. In 1999, the militancy of striking Albanian migrantsÂ led to some improved conditions and pay increases, but it was won through intimidating Bangladeshi workers with death threatsÂ not to break the strike. Nine years later, those successes were attempted to be repeated by Bangladeshi migrant workers with the Greek trade union PAME and activists from Greek Communist Party, by initiating a campaign in 2008 for a daily wage increase from 22 Euros to 25. The workers and campaigners were met with a violent confrontation in which many workers were beaten suffering serious injury.Â This incident made the phenomenon of “Blood Strawberries” more widely known. Though the campaign did not succeed in raising wages, it resulted in the prosecution of 80 employers for illegally hiring undocumented workers. Further investigations by journalists revealed how local municipal officials were selling fake documentation to migrant workers, and police prosecutions meant that employers in the town became very hostile to “Athenian” journalists which might partly explain the limited information that has been reported about the most recent violence.

Bloody confrontations have been steadily increasing since then, there is a story of complaints of unpaid wages being made to one local farming company, theÂ two workersÂ were tied to a motorbike and dragged through the streets of Manolada. Another report from August 2012 of anÂ Egyptian migrant who was “disciplined” by local thugs when attempting to retrieve wages for unpaid work. The company associates broke his hand by locking his forearm in a car window and then pummelled his fingers using a hammer. Local anti-racist and trade union activists have complained that local authorities have turned a blind eye to a modern day slavery, others point to the influence of Golden Dawn, who have issued a statement condemning the violence and blaming the political establishment for not aggressively deporting “illegal immigrants”. The Greek government has announced that none of the workers that have been injured by the shootings will be deported but the fate of the many other undocumented workers were not injured during the protests remains unclear.

Online activists have initiated a boycott campaign using #bloodstrawberries, others in the Greek anti-racist movement have called for a Greek general strike to protest at the attack on migrants in Nea Manolada on May 1st. This struggle is not unique to Greece, and dotted across Europe are several examples of migrants working and living in similar squalid conditions. From Europe’s precarious agricultural economies like Spain’s salad hothouses and Italy’s “tomato slaves”, to Europe’s urban industrial centres, such as the exploited cleaners living in London’s Olympic Park “slums”, and the imprisoned immigrant workers of Amazon Germany. Workers born largely in the Global South are getting organised and fighting against exploitation. It is a battle being waged in all the corners of Europe.


[…] I wrote a thing about the 30+ Bangladeshi migrants in Nea Manolada who got shot by their Greek bosses. Read it here. […]


[…] have been similar incidents beforeÂ in the same area, with scant coverage inÂ mainstreamÂ media, as the writer and activist collective […]