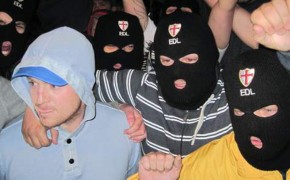 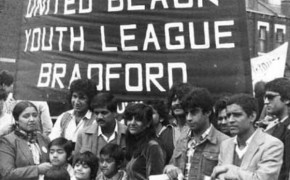 Beyond “A Plague on Both Their Houses”: The Bradford 12 & the Liberal Anti-Fascism of Hope Not Hate

By Sita Balani / @sitainshort
In 1982, 12 young Asian men from Bradford took the stand in court on charges of making explosive devices with the intent to cause damage to property and persons, facing penalties of up to life imprisonment. The previous year they had devised makeshift petrol bombs out of milk bottles in preparation […]

Anti-Fascist Alliance Report on the SDL/EDL in Glasgow

ByÂ Lance Goodey
I arrived around 11am and found my friends and a group of around 50+ Anti-Fa, including a sound system waiting. There was a heavy police presence, but no Section 60 in force, which surprised me.
There was a loose line of police cordoning off the bottom of St Enochâ€™s Square, but I just walked through […]

By Sacha Ismail
The workshop on discrimination and violence against Europeâ€™s Roma communities which I attended on the afternoon of Unite Against Fascism conference (25 February) was excellent â€“ informative, alarming and a call to action. No doubt there were other useful parts of and aspects to the event. But as a conference it was not […]

By Mhairi McAlpineÂ / @mhairi_mcalpine
Unlike many other European countries, and indeed England at points in its history, Scotland has no significant history of fascist organisation. In the 20s and 30s, while it was in the ascendancy across Europe and a fascist presence was starting to be established in England under Mosley’s British Union of Fascists, Scotland […]

The EDL and The Islamist Far-Right

From The Commune
Last month the English Defence League announced plans to march in Tower Hamlets, East London, in protest at an Islamist conference planned for June 20th at the Troxy centre. The conference was planned by groups tied to Islamic Forum Europe, among the major Islamist groups in the area.

Anti-racists planned to demonstrate against the […]

ï»¿
Abdul Omer Mohsin, Unite convenor for London Sovereign, lost his appeal against dismissal on Tuesday. The Unite official who represented Omer at his appeal took the companyâ€™s case apart. Its obvious that Abdul Omer has been sacked for being an effective union convenor.
Drivers at Sovereign had the worst pay and conditions inÂ London. That has changed, […]